Châteauneuf-du-Pape Weathers the Challenges and Changes

Châteauneuf-du-Pape has plenty to offer in 2019, 2018 and 2017, although not in the quantities of the preceding two years. All three vintages produced several wines that are extremely user-friendly, offering abundant, expressive fruit and adequate but not forbidding structure, which is what the market is demanding more and more of these days.

Châteauneuf-du-Pape faces significant challenges from changing weather patterns. Two thousand-nineteen, 2018 and 2017 each presented a different set of hurdles. Yields were off, sometimes severely, in 2017 and 2018 because of frost and mildew, respectively. Although 2019 was consistently warm to hot and quite dry, it was a less problematic year, and yields were healthy, much to the relief of stressed-out growers. The good news for many consumers is that most wines from all three vintages will show well on the young side, at least compared to wines being made a couple of decades or a generation ago, because of their ripeness and relatively easy-going structures. 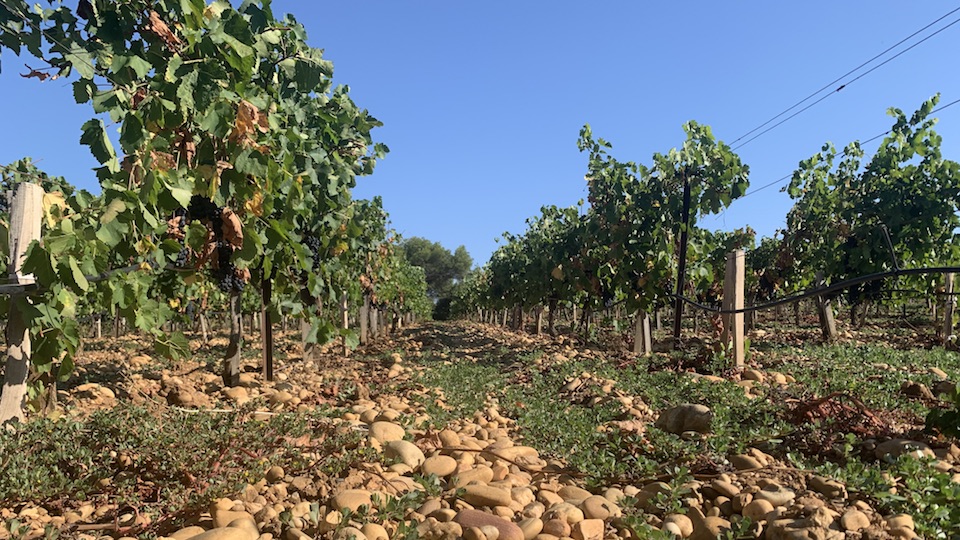 Large, round river stones, or galets roulés, dominate the southern vineyards of Châteauneuf-du-Pape and were prized for retaining the days’ heat through cold nights. But the weather has changed, and the nights are often warm now.

The 2019 Growing Season and Wines

A blend of ripeness and freshness, favoring the ripe aspect, marks most of the wines of the 2019 vintage. Because Châteauneuf-du-Pape leans so heavily on Grenache, after two years of weather-related issues, 2019 was a huge relief to the vines and those who tend them. The region enjoyed a spring of moderate temperatures, with no frost events. Warm (but not hot) weather started in June and carried through the summer with some short heat waves. The appellation also enjoyed well-timed, moderate, off and on rainfall just before harvest. Across the area, the grapes were clean and disease-free. Sugar levels in the all-important Grenache were on the high side. Tannins were generally more elevated than those of the previous two vintages, though not excessively so, while acidity was higher as well.

The wines often display plenty of dark fruit character. While some can lean toward the ripe side, acidity levels are quite healthy, so richness and power are generally mitigated. In the 2019s, I have often found an interesting and appealing push/pull of depth and vivacity. It will be interesting to see if the underlying acidity in the wines helps to carry them along to older ages than their 2018 and 2017 siblings. For now, I am confident that they will because there’s a good degree of overall tension to the vintage. Readers with traditional palates may find many of the wines a bit on the rich, exotic or confit side for their personal tastes.

The 2018 Growing Season and Wines

Two thousand eighteen saw an early spring that was markedly cool and wet, which slowed down flowering, often significantly. Temperatures warmed up in May, but the weather remained mainly damp with very little wind. That created humid conditions and set the stage for mildew, which meant extensive culling in the vines, especially for the early-ripening Grenache. Some growers reported up to 60% crop loss for their Grenache, which tends to have tight clusters where mildew and gray rot can find a cozy home. Summer brought drought conditions, but there was sufficient groundwater, so the vines didn’t shut down as they would following a dry spring. The fruit ripened fast and acidity levels began to fall through mid- to late summer. In an effort to preserve the grapes’ freshness and stave off rising sugar levels, harvest commenced the last week of August. It was a fairly rapid harvest that wrapped up after almost exactly four weeks, by the end of September.

Because of the increased percentages of Mourvèdre and Syrah in many wines, a result of the often-massive Grenache deficiency, the blends are mostly darker and more savory in style. That said, Mourvèdre and Syrah were extremely successful in 2018, which is the reason so many wines display more salty character than usual. While many wines are forward in the fruit department (especially the black and blue sort), they also have good structure. This will make many of them deceptively ageworthy. 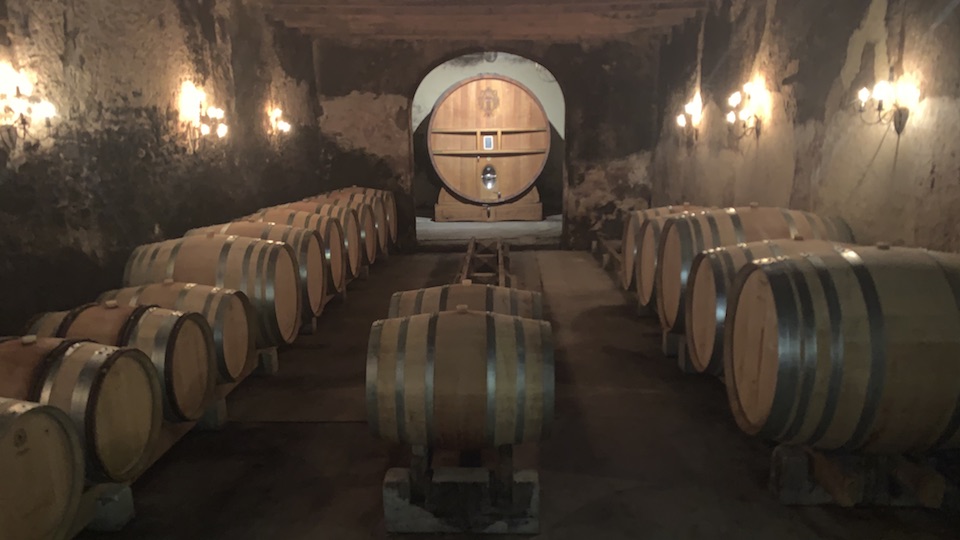 The cold barrel room beneath the historic and imposing Château La Nerthe, which produces some of Châteauneuf-du-Pape’s longest-lived wines from the estate’s 92 hectares of vines.

The 2017 Growing Season and How the Wines Show

An excessively rainy, warm, late winter and early spring got the vines off to a fast start (not a good thing), resulting in early flowering of the Grenache. Right on cue, cold weather set in, and frost followed in late April and early May. That was a kick in the gut to Châteauneuf-du-Pape’s key variety. The sad result was up to 50% crop loss across the region. Obviously, it was especially devastating for growers whose vineyards are heavily or exclusively dedicated to Grenache. The weather turned dry and warm by late June. An uneventful summer followed and carried on through late September. This, fortunately, allowed growers to tend to their vines without any more weather pressure. Harvest wrapped up in late September, and despite the diminished yields, there was satisfaction with the quality of the fruit.

Because of the short Grenache crop, the wines have good concentration. Thanks to the increased reliance on Mourvèdre and Syrah, the wines show more dark fruit character than normal. That extra percentage of those two varieties has also given the wines good structure that is only beginning to express itself. Acidity levels are sound as well. While there is a forward character to many of the wines, those with less Grenache than normal will age more slowly than their current personalities would lead one to expect.

The Changing Face of Châteauneuf-du-Pape

If weather patterns continue to favor shorter winters and early flowering, Grenache will become increasingly difficult to grow productively in frost-prone zones. Historically, vines’ buds here are vulnerable into early May. Out of necessity, vineyards, or at least parts of them, are going to be replanted or grafted-over to varieties that flower later. In fact, it’s already happening. No winery or region can survive for long if their linchpin grape suffers dramatic crop loss on even a semi-regular basis. Mourvèdre, historically native to Provence, is the variety du jour, but Syrah has long had a place at the Châteauneuf table as well. The inherent dark fruit and savory personality that those grapes bring to the party will no doubt change the traditional character of many wines here. A side benefit may be wines that possess less lofty alcohol levels and more structure than in the past, as Grenache does love a hot growing season and gets extremely ripe, with predictably rich and even oversized wines as a result. This is already a hot topic among producers and Châteauneuf aficionados and will continue to be so for some time.

As producers are shifting away from heavy Grenache dominance for bottlings such as their “basic” or “tradition” examples, the wines show less of the overt, jammy red fruit character they may have displayed in the past. Once, Grenache-centric, entry-level Châteauneuf-du-Papes could trick one into believing that they were drinking Pinot Noir from a hot vintage and/or a warm region. Some of the high-end wines that are made with at least 90% Grenache can still fool me, and happily so. But at the entry level, there seems to be increasingly more blue and even black fruit. Floral expressions are veering from lavender to violet, and tannin profiles are becoming more pronounced. This isn’t an opinion about changing quality, but an observation about style. 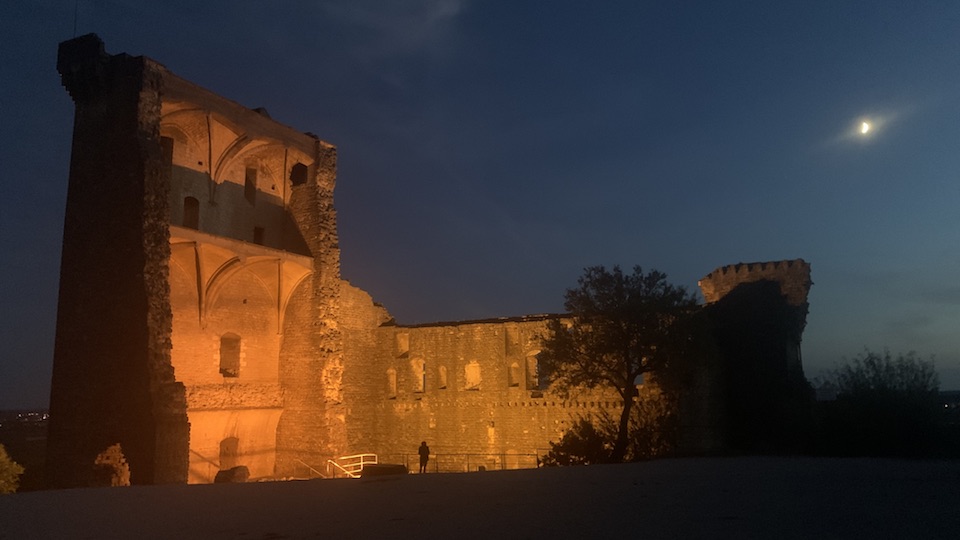 Châteauneuf-du-Pape’s landmark castle has a history stretching back to 913. It was enlarged over the centuries but was almost completely demolished by the occupying German army, who blew it up before fleeing the area on August 20, 1944.

The late fall and winter of 2019/2020 witnessed more rain than usual, which was a very good thing, as it increased water table levels that are crucial if a hot season with drought-like conditions follows, as often happens in this climate. Flowering occurred on the early side, again, but other than some scattered frost at the end of March, spring was uneventful, much to the growers’ gratitude. There was also adequate rainfall through the spring and into early summer. With warm but not hot temperatures, beneficent winds kept the vineyards dry. Rains stopped in early June, while temperatures rose. While there was little precipitation through the summer, the heat wasn’t extreme, except for some spikes in late July and early August that gave a jolt to the grapes’ sugar build-up.

That set the stage for an early harvest, one week earlier than 2019 and a full month ahead of what was typical here until the late 1990s. That gives an idea of just how fast the fruit is ripening in many vintages now. There were healthy yields of clean, ripe fruit, but little of it excessively ripe. Reported tannin levels are on the low end, and acidity levels are sound, signaling a vintage that will likely be enjoyable on the young side. The very small handful of 2020s that I have had so far confirm that view. I look forward to confirming my nascent opinion this winter.

I tasted all of these wines through the summer and into early fall in New York.

The Riches and Richness of Châteauneuf-du-Pape, Josh Raynolds, December 2019