Timing is everything, and fortunately my visit to Roederer turned out to be very well-timed. Chef de Caves Jean-Baptiste Lecaillon prepared an incredible tasting of the estate’s 2009 vins claires that provided a rare glimpse into the base wines that make up the house’s top bottlings. I also had a chance to taste several of the just-bottled 2009s in their final blends and the 2004 Cristal and Cristal Rosé, both of which are scheduled to be released later this year.

The mood was quite somber when I visited Champagne this year. A number of the large houses were crippled by a union strikes staged to protest the drastic reduction in the year-end bonuses workers have become accustomed to receiving. These bonuses are tied to financial performance of the houses, so it is little surprise payments were down drastically from the previous year. There was also a large debate as to whether houses would declare 2009 as a Vintage year. It was clear business decisions would ultimately play just as important a role as quality given the massive slowdown in sales around the world.

Against this backdrop, I sat down with Lecaillon to taste through a number of vins claires plus a few finished wines from bottle. The wines were arranged in several flights, each designed to focus on one or more of the aspects that makes Champagne so fascinating. Terroir, the role of yields, vinification in steel as compared to oak, and conventional versus biodynamic farming were some of the topics these flights addressed. It was one of the most fascinating and instructive tastings I have ever done. I have not provided ratings for vins claires as the wines are true infants at this stage, but overall I was very impressed with the quality of what I tasted across the board. The wines show an attractive combination of ripeness, acidity and structure with plenty of site-specific character and in some cases, quite a bit of plumpness as well. I scored the 2009s from bottle in ranges, as these wines are also unfinished given that they need to age several years in bottle before they are disgorged and receive their dosage. I do provide scores for the 2004s, which are fully finished wines.

Roederer makes three lines of Champagne. The NV Brut Premier and Vintage Blanc de Blancs constitute the entry-level at Roederer, although the truth is that these wines are of such a consistently high level that they regularly outperform other wines in the same categories. The Brut Premier is the only wine in the range that contains Pinot Meunier and also the only wine where part of the juice undergoes malolactic fermentation, both employed to give roundness, softness and early accessibility. Roederer’s reserve wines are enough for well over 1 million bottles and span a number of years. The Brut Premier typically includes 30% or so reserve wines going back six to seven vintages.

The Vintage and Vintage Rosé are also reliably outstanding. The Vintage is typically 70% Pinot from Verzy and Verzenay and 30% Chardonnay . The Vintage Rosé is 70% Pinot from Cumières and 30% Chardonnay from several villages in the Côtes des Blancs. Lecaillon favors Pinot vineyards with a northern exposure as he feels wines from due south vineyards can be excessively heavy and ponderous. Richness in the Pinots is achieved through Draconian yields that are typically half of those the estate works with in their Chardonnay vineyards. 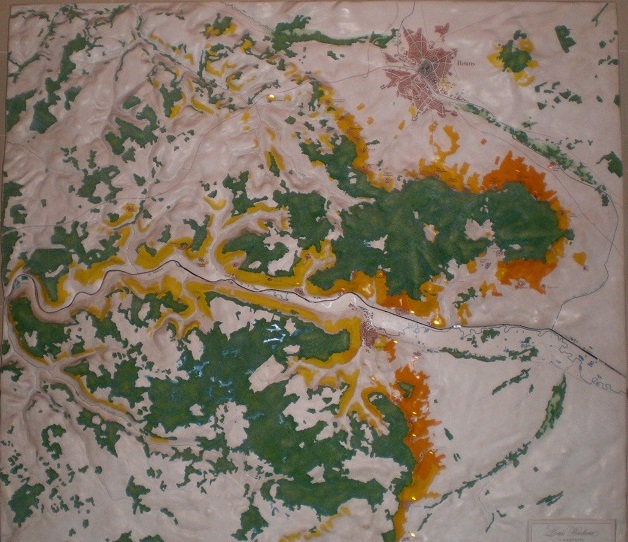 The Chardonnay from Avize was simply fantastic. The bouquet was beautifully expressive, but the wine really came to life on the palate, where it literally exploded with flavor. The fruit was very ripe and almost tropical, but precise, mineral notes framed the finish nicely. This fabulous wine was used for Cristal. The Chardonnay from Cramant was very good but not great. It was a classic blending wine, with chief attributes of balance and harmony rather than true character. This was used for the Brut Premier.

Le Mesnil is one of the most hallowed places in all of Champagne. I tasted two wines from the same vineyard in Mesnil but picked ten days apart. The first Chardonnay was crisp and nicely detailed. I found it gorgeous but not explosive. The second wine, from fruit picked in late September, showed far greater richness, weight and aromatic complexity, all of which qualified it for inclusion in Cristal. According to Lecaillon, as harvest time approached sugar levels looked good but the aromatics weren’t fully developed so he opted to pick the parcel in two separate passes. The resulting wines are strikingly different.

Avize is another of Champagne’s grand cru villages. This pair of wines provided a fascinating contrast. The first Chardonnay was fermented in steel. Focus, drive and minerality were the key qualities in this pretty wine that was used for the Brut Premier. The Chardonnay aged in oak was seductive and rich yet beautifully nuanced. The detail here was striking. This second Avize Chardonnay was used for Cristal. 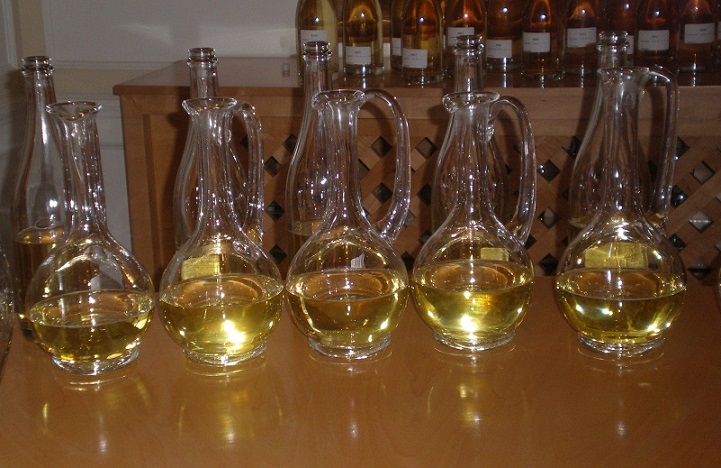 Pinot Meunier is the classic blending grape in Champagne and plays a large role in many non-vintage wines. Meunier contributes fruit and roundness, but the wines seldom have any real personality of their own. The first three samples did not undergo malolactic fermentation. The Meunier from a south-facing plot in Venteuil showed lovely richness in a juicy style. A sample from Reuil was a touch leaner and more focused then the Venteuil. The Meunier from Villedommange was good, but not particularly interesting on its own. The Meunier from Chamery was all about texture and roundness, much of which was achieved through malolactic fermentation. These pretty, up-front wines were all used in the Brut Premier, the only wine at Roederer that employs Meunier.

All of the wines in Flight #4 were Marne Valley Pinots with no malolactic fermentation. Roederer favors north-facing sites for Pinot, which help preserve freshness and minerality. The estate does not own or source fruit from south-facing-vineyards in Bouzy or Ambonnay as the feeling is that those areas yield wines that are too ripe. 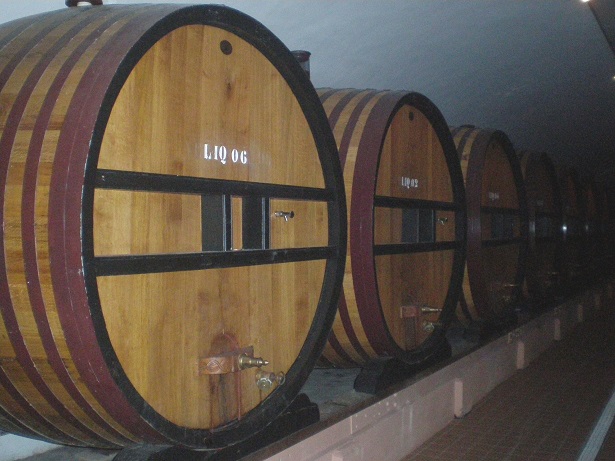 Two samples of purchased Bouzy Pinot Noir were fascinating as they came from a vineyard divided into two parcels; one farmed conventionally the other biodynamically. The wine from the conventionally farmed vineyard showed fabulous length, minerality and intensity, while the sample from the biodynamically farmed parcel was more mineral-driven and perhaps a touch leaner but also wonderful. The two wines clearly had different attributes although it was hard to say which was the better or more complex wine.

Two Pinots used for the 2009 Cristal were both fabulous. I loved the Pinot from Verzy, which was round, seamless and powerful, with plenty of underlying structure. The Verzenay Pinot was rich and deep, with a baritone register to the fruit that recalled the Burgundies of Gevrey. Both of these magnificent Pinots came from estate-owned vineyards.

The conventional-biodynamic comparison was examined again through the lens of two Pinots from Verzenay cropped to identical yields of 13,000 kilos per hectare. There was a laser like intensity from the conventionally-farmed Pinot from Verzenay used in the Brut Premier. A second Verzenay Pinot, farmed biodynamically, was ample and broad-shouldered, with tons of fruit that melded seamlessly into the minerality and acidity. This was a beautiful wine perfect for Cristal.

Pinot from Verzy fermented in steel revealed red berries and flowers with plenty of intensity and drive. It was excellent, but not outstanding. This lot was used for the 2009 Vintage. A second Pinot also from Verzy, but here fermented in oak, was rich, sensual and beautifully layered, with sublime intensity and raciness. Not surprisingly, this was used for Cristal. I was struck by how different these two wines were. 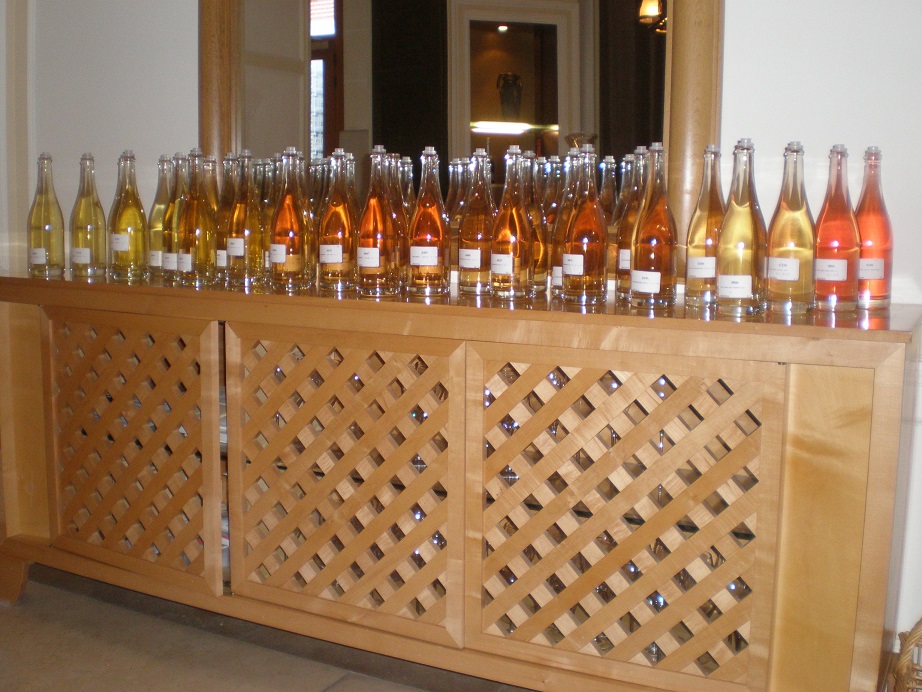 The 2009s were being assembled and bottled during my visit. The NV Brut Premier (2009 blend) is 40% Pinot Noir, 40% Chardonnay and 20% Meunier, with the addition of 30% reserve wines spanning six vintages.  This shows lovely balance in a rich, round style I find highly appealing. The Brut Premier looks very promising at this stage. The 2009 Rosé Vintage is 70% Pinot Noir from Cumières and 30% Chardonnay from Mesnil and Avize. Roughly 12% of the wine is aged in oak. Today the Rosé is hard to fully appreciate as the tannins make it rather imposing, but it is very, very early days for this wine.

The 2009 Cristal literally shimmers on the palate, showing great depth and purity in its sumptuous layers of fruit. It is a magnificent wine endowed with superb length and exceptional overall balance. The 2009 Cristal is 60% Pinot Noir and 40% Chardonnay. The percentage of wine aged in oak is 15%, which is down slightly from previous vintages. The 2009 Cristal Rosé is simply fabulous. It is shaping up to be an explosive, kaleidoscopic Champagne loaded with sumptuous fruit. The balance and pedigree here are simply mind-bending. In 2009 Cristal Rosé is 60% Pinot Noir from Aÿ and 40% Chardonnay from Mesnil and Avize. Not a bad combination!  Approximately 12% of the wine was aged in oak. This will be a fascinating Champagne to follow in the coming years and decades.

The estate’s 2004’s had been recently disgorged at the time of my visit. An explosion of fruit emerges from the 2004 Cristal, making a strong and very positive first impression. This is a wine of incredible finesse, length and balance that promises to develop beautifully over the next several decades. Today the 2004 comes across as more linear than the 2002. It should fill out nicely in bottle, although my sense is it will always remain a more focused, pointed vintage. The 2004 Cristal is 60% Pinot Noir and 40% Chardonnay. In 2009 dosage was 9-10 grams per liter, down from the 12 or so grams that was customary five years ago. This bottle was disgorged in January 2009. The 2004 Cristal Rosé, from magnum, is less expressive than the Cristal. Today it is too soon to tell how much of that may be attributable to the larger format. The 2004 Cristal Rosé is 70% Pinot from Aÿ and 30% Chardonnay from Avize. This remains a very tight, mineral-driven Cristal Rosé that will require significant bottle age. A final burst of floral red berries on the finish bodes well for the future. Today I prefer the Cristal over the Cristal Rosé, but time will ultimately tell how these wines develop. I recently tasted the 1996s and it is now appears the Rosé has moved ahead, if very slightly, from the Cristal. The 2004 Cristal Rosé was disgorged in December 2009 and dosage was 9 grams per liter.