The energy in the room was palpable and electric from the very start. I lead a few seminars each year, but this was different. I am not sure why. The wines were dazzling. Surely that had a lot to do with it. But the wines alone are never enough to sustain the energy in a room. There has to be something more. And that something is usually the audience. I can control which wines are served in a tasting, but not the participation of the attendees. This was one of those days where everything came together. I can say I had just as much fun tasting through these ten Champagnes as anyone in the audience.

The setting was Pebble Beach Food and Wine. I was joined on the panel by Laura Maniec, MS, of Corkbuzz, Rajat Parr of Sandhi Wines and Sabato Sagaria, MS, Wine Director of The Little Nell. For the occasion I chose ten of my favorite grower Champagnes. Frankly, it was hard to narrow the choices to just ten, as there were many wines I would have loved to include. 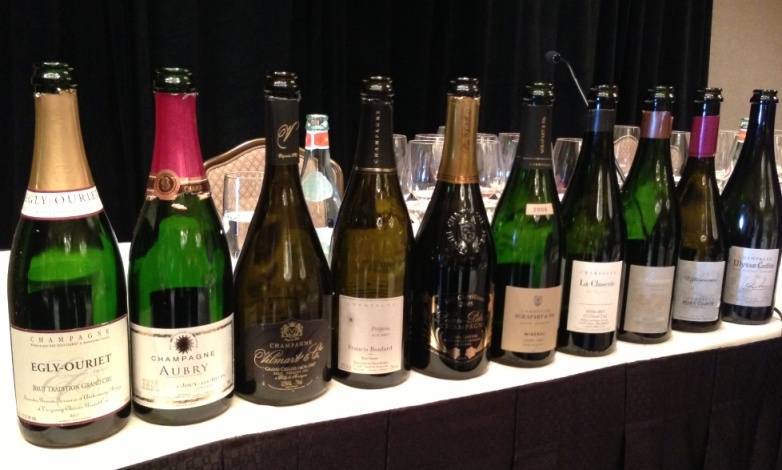 Egly-Ouriet’s NV Brut Tradition often punches above its weight. That is certainly the case here. Extended aging on the lees – an Egly signature – along with a majority of Pinot Noir gives the Brut Tradition much of its breadth, power and richness. The personality of Ambonnay in all of its glory comes through loud and clear. This edition is based on 2007, with 50% reserve wines from 2006, 2005 and 2004. We are off to a great start. Drinking window: 2013-2020. The NV Brut Rosé Premier Cru from Aubry remains one of the most utterly exquisite Champagnes I have tasted over the last year. Based on the 2009 vintage, the Rosé Premier Cru is rich yet also weightless on the palate. Mesmerizing pretty much sums it up. Drinking window: 2013-2017.

The 2007 Brut Premier Cru Cuvée Grand Cellier d’Or is classic Vilmart. Bright, perfumed and beautifully delineated, the 2007 is wonderfully expressive and open. I don’t expect the 2007 will be especially long-lived, but it is absolutely gorgeous today. Drinking window: 2013-2017. Francis Boulard’s 2007 Brut Nature Petraea MMVII provides a fascinating contrast to the Vilmart in its warm oxidative notes and resonant texture. The Petraea is made in perpetual solera style. The base vintage, here 2007, accounts for only 25% of the wine, while the reserve wines, which go back to 1997, make up the majority of the blend, which adds considerable complexity. Whereas the Vilmart is predominantly Chardonnay, the Boulard is mostly Pinot Noir and Meunier. Drinking window: 2013-2017.

The 2005 Brut Cuvée Speciale Blanc de Blancs Les Chetillons from Pierre Peters is beautifully open and expressive, which is quite unusual in young Chetillons. That is good news for those who want to catch a glimpse of one of Champagne’s most exciting wines. This is about as good as it gets in what turned out to be a very challenging vintage in Champagne. Drinking window: 2013-2020. Well, perhaps making an exception for Agrapart’s 2005 Extra Brut Blanc de Blancs Grand Cru Minéral. The trademark Agrapart tension and energy is alive in the glass. Pure crystalline and nuanced, the 2005 once again proved why it is one of the wines of the year. More than a wine of the year, though, the Mineral really reflects the extraordinary diligence and passion of Pascal Agrapart. What a great showing. Drinking window: 2013-2025.

Jérôme Prévost’s Brut Nature NV (2010) La Closerie – Les Beguines is one of the raciest, most viscerally thrilling wines of the afternoon. Tightly wound and powerful, the 2010 seems to sparkle with tension, length and finesse. The flavors are quite focused, but over time the breadth of the Pinot Meunier becomes more pronounced. The Beguines is another wine that is firing on all cylinders. When you taste wine for a living, sometimes it’s easy to lose perspective on just how rare some of the best wines are. Seeing the audience totally turned on by a relatively unknown wine is immensely gratifying. Drinking window: 2015-2025. The same thing happened with Cédric Bouchard’s NV (2010) Brut Nature Blanc de Noirs Val Vilaine. Here, the fruit is so bright and focused, it’s hard to believe this is 100% Pinot Noir. There is a purity, nuance and transparency in the Val Vilaine that is utterly mesmerizing. I have had this wine many times since it was released and it has never failed to leave a lasting impression. Drinking window: 2013-2018.

A few months ago, I was having lunch at Le Bernardin, one of New York’s finest and most elegant restaurants, and I was served a glass of Marie-Courtin Champagne. The wine was so vivid. It took me back to my tasting at the winery the year before. I couldn’t help but notice how a wine of such agrarian and simple – in the very best sense of the word – was so at home in such an elegant restaurant. Pinot Noir takes on racy contours in the 2008 Extra Brut Efflorescence. Still quite taut, the 2008 is all about focus. From time to time the breadth of the Pinot comes through, but it is the wine’s sheer vibrancy that seems to speak most. This is a fabulous showing. Drinking window: 2013-2018. Oliver Collin’s NV (2008) Extra Brut Blanc de Blancs Les Perrières leaves the room speechless. What a wine! A warm, toasty bouquet fleshes out into deep, expressive fruit in a big, large-scaled, vinous Champagne of the highest level. All the elements are very much in place in a wine that captures the best in small production, artisan Champagnes. Fermentation and aging in French oak barrels give these wines distinctly Burgundian overtones to match fruit from impeccably farmed vineyards. I think it is safe to say that, on this day, the 2008 Les Perrières stole the show. Drinking window: 2013-2018.