Rheinhessen Riesling 2016: The Triumph of Subtlety

In 2016, Mother Nature and Rheinhessen’s top growers seem to have made the same request of one another: “Cool it!” Happily, both complied. Without question, Rheinhessen growers have experienced two outstanding vintages in 2015 and 2016, but the latter boasts a surplus of wines that display the imponderable interplay of balance, elegance and charm, which to my palate give them a slight qualitative edge and an at least equal claim on cellar space.

Rheinhessen – in particular the rolling, only rarely steep hills of its calcareous Wonnegau sector – has been a 21st-century darling among German wine critics and well-heeled German Riesling lovers. Such good fortune is owed in significant measure to the exemplary wines of Klaus Peter Keller and Philipp Wittmann, who are nowadays generally regarded as among their nation’s top six or eight wine growers. (For many influential observers, make that “top three or four.”) In the wake of Keller’s and Wittmann’s success, numerous younger talents have emerged, inspired and in some instances mentored by them.

Meanwhile, the so-called Rheinfront, or Roter Hang, at Nierstein and Nackenheim – the sector that almost throughout the 20th century, really until its final decade, was considered not just Rheinhessen’s foremost but rather its sole claim to viticultural greatness – has recently been undergoing a welcome revival, one that will hopefully grow before long to encompass a few more of Nierstein’s once-renowned addresses. The recent evolution of Rheinhessen viticulture can’t be discussed without mentioning Daniel Wagner of Weingut Wagner-Stempel, who is single-handedly demonstrating the extraordinary potential of what is locally quite understandably known as “Rheinhessian Switzerland,” a sector whose soils and microclimates are akin to those of the immediately adjacent Nahe. 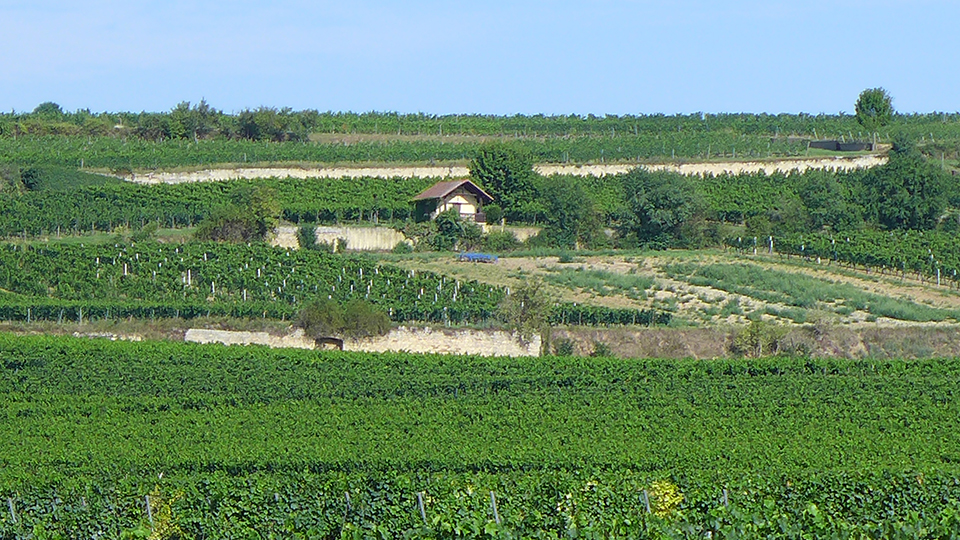 Westhofen’s chalky, largely gentle slopes – once denigrated as Rheinhessen’s viticultural hinterland – are now home to some of Germany’s most prestigious Rieslings, above all those of Keller and Wittmann.

The popularity of Rheinhessen – in particular, Wonnegau – Rieslings has been both prompted by and a cause of wines that tend toward full body, textural firmness, prominent acidity, pronounced phenolics, adamant dryness, and stony, chalky underpinnings, all of which combine for a kind of austerity that German wine aficionados love and the less charitable among foreign observers (myself at times included) are tempted to cite as a symptom of masochism. But stylistically speaking, things are changing rapidly in these parts. It’s dawning on even the most fervent advocates of power (the German buzzword is Druck) that grape sugar is a false friend, and that today’s climatic conditions demand measures to restrain must weights while promoting aromatic development and permitting long hang time that was once taken for granted throughout Riesling Germany. And as long as one is testing and honing diverse techniques for achieving those ends, why not go all the way and embrace elegance, levity and aromatic finesse?

Increasingly many Rheinhessen growers are also recognizing that residual sugar is not their enemy, or at least that it can play a significant and successful role in Rheinhessen Riesling. Both of the aforementioned realizations come together in the Rheinhessen VDP’s recent repudiation of a previous prohibition on site-specific Kabinett and the flourishing of that delicate, unapologetically sweet genre in such talented hands as those of Gillot, Keller and Schätzel, Mosel-lovers all – a development about which I have already written extensively, including in the context of my two previous Vinous reports covering Rheinhessen.

Along comes 2016 with its seemingly interminable spring and early summer rain, its hot, dry August and September, but then a chilly, clear October through early November. If you were a grower concerned about rising alcohol, premature harvesting or wines lacking in finesse, it turned out Mother Nature had your back. Even if those were not among your major concerns, she was going to turn the rudder as hard as possible in the direction of moderate must weights, ingratiating acidity and stylistic subtlety. Granted, some Rheinhessen growers felt compelled to harvest before the growing season turned chilly, and in the Pfalz where (as I’ll report shortly) a great many of the best growers were hard at work picking long before the end of September, some superb results were achieved. But generally speaking – and as Keller among others has long argued – chilly autumn temperatures, for reasons that aren’t clear, are conducive to producing the best-balanced and most complex results. And as I have already pointed out in connection with my coverage of 2014 and 2015, an increasingly prevalent desire among growers to let their Grosse Gewächse finish with only a few grams of residual sugar has once again, thanks to Mother Nature’s collaboration, kept them from having to pay a price in excessive alcohol. 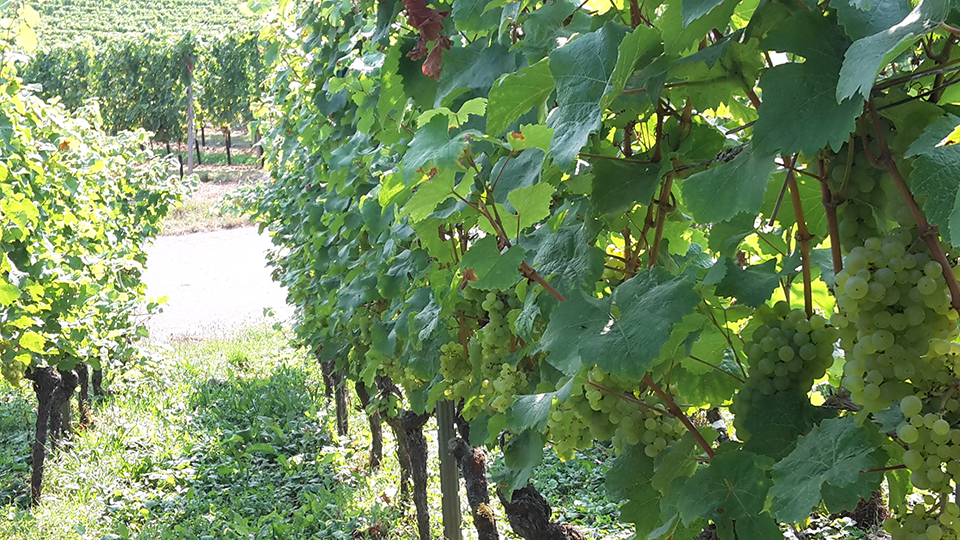 Another important aspect of vintage 2016 in German Riesling-growing territory (as I have already emphasized in my coverage of the Mosel, Saar and Nahe) was the nowadays rare luxury enjoyed by most growers to take their time harvesting without having to worry about encroaching botrytis, rapidly rising must weights, or falling acidity. This permitted strategizing to achieve whatever diverse goals one had, though it must be admitted that many Rheinhessen growers are still single-mindedly focused on Grosse Gewächse and render generic or village-level Rieslings that perform as Grosses Gewächs aspirants. This “leisure time” aspect of Mother Nature’s and growers’ collaboration in 2016 is another reason why the wines have turned out so successfully. Without question, Rheinhessen growers have experienced two outstanding vintages in 2015 and 2016, but the latter boasts a surplus of wines that display the imponderable interplay of balance, elegance and charm, which to my palate give them a slight qualitative edge and an at least equal claim on cellar space. What’s more, having been spared frost and the worst of peronospora, the top Rheinhessen growers seem to have been Germany’s least likely to have experienced serious yield reductions. “Honestly, I was as amazed at how much we ended up harvesting as I was at the high quality,” ran Daniel Wagner’s representative assessment of the year.

Once one’s Riesling has fermented – and eventually after it’s bottled – growers continue to take their time: Rheinhessen shares with other German Riesling regions an increasing emphasis among leading growers, at least for a select group of wines, on longer élevage and not just the attendant later bottling but also later release. Gillot, Keller and Schätzel are among the trendsetters in this regard as well, each having earmarked at least one Grosses Gewächs for release only in the second year after harvest. Protracted, spontaneous fermentation as well as extended élevage are also conducive to alcoholic moderation as well as to wines that, thanks to their lees contact, are able to combine richness of texture and a sense of substantiality with relative alcoholic levity. 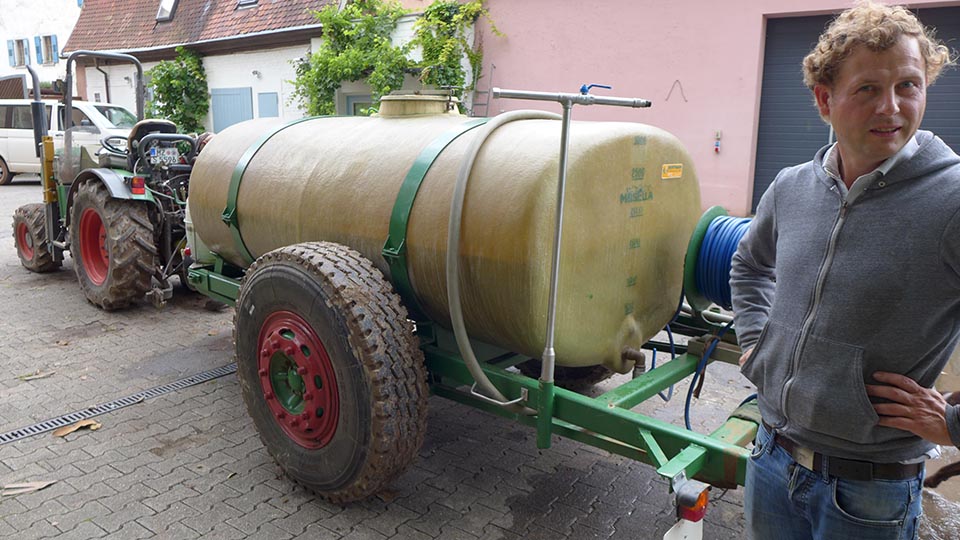 Just in time for 2016’s unprecedented eruptions of peronospora (a.k.a. downy mildew), Nierstein trailblazer Kai Schätzel finally hit-upon a contraption for spraying vineyards rapidly even when tractor wheels are getting stuck in red mud. (See my report on his 2016s for details.)

Another trend Rheinhessen shares with other German Riesling regions is an increased interest in swapping tanks for a return to casks and barrels. But well-preserved old casks are rare – though Keller has been actively combing the Mosel for fuders and a few years back Caroline Gillot stumbled on a whole cellar’s worth of Rheinhessen Stückfässer – so more wood generally also means new wood that needs integrating, and oaky notes in Riesling are likely to become more frequent before they become less so. Wisely, growers who are serious about Silvaner and Pinot Blanc – traditional denizens of Rheinhessen vineyards whose potential is underappreciated and whose top examples in 2016 offer fantastic value – will “season” their new casks using those grapes before proceeding to Riesling. But a large cask can capriciously convey woody notes to the wine inside even a half dozen or more years after it was assembled. And the ratio of Silvaner and Pinot Blanc to Riesling, even at estates that are serious about all three, is never high.

This report is based on visits with a dozen Rheinhessen growers between late July and mid-September of 2017, supplemented by subsequent stateside re-tasting and samples from three additional estates. Following usual Vinous practice, scores on those few wines that I have not tasted since they were bottled are expressed in parentheses as point ranges. Wines I rated 86 points or lower are frequently alluded to but generally not accorded a tasting note. I make exceptions to that rule for wines I still deem good values or if I think a tasting note will demonstrate some important point (which might be that I think the wine in question is routinely overrated or perhaps that its latest, disappointing performance requires special explanation).

Vintage Preview – 2017 in Austria and Germany: Hanging in the Balance, David Schildknecht, September 2017