Rheinhessen Riesling vines that escaped devastation by late April frost and a savage August 25 hailstorm were still exposed to punishing May-July drought. But growers soldiered on and, with help from subsequent meteorological breaks, were rewarded with impressive results. 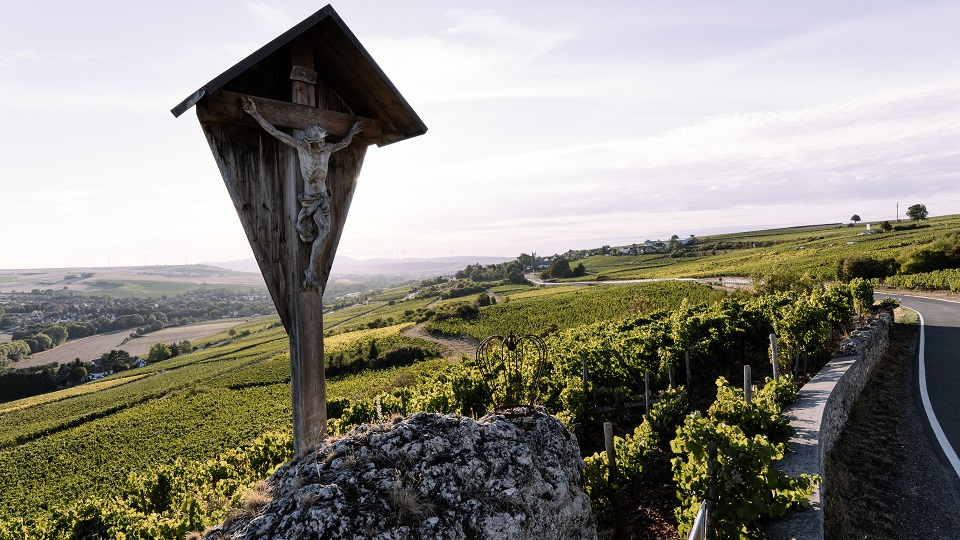 Since 2010, Oliver Spanier's Riesling from Am Schwarzen Herrgott (among Germany's earliest recorded vineyard sites, named for its prominent wooden crucifix) has profoundly demonstrated the viticultural potential of southwestern Rheinhessen's Pfrimm Valley, which funnels cool air from the 2,250-foot-high Donnersberg less than 10 miles distant.

While Rheinhessen, like the rest of Riesling Germany, benefited from January temperatures low enough to kill off larvae and spores of pests and send the vines into proper dormancy, that didn’t last for long. Rheinhessen vineyards, along with those of the Pfalz, set the subsequent pace for one of the most precocious growing seasons in memory. From March 20-21, for example, Daniel Wagner reported an average of 10 hours’ sunshine per day and temperatures that never dipped below 50 degrees Fahrenheit, resulting in the earliest bud-break ever recorded in “Rheinhessen Switzerland.” And then, just as in the immediately adjacent Nahe, late April frost – with temperatures as low as 19 degrees Fahrenheit – devastated his sector’s vine shoots. Yet even after such a shock, plant growth in most affected vineyards soon resumed its progress. Ripening generally accelerated during the extremely warm, dry midsummer, though in some especially sun-exposed and less water-retentive sites – such as those on Nackenheim and Nierstein’s steepest slopes – vines sporadically shut down.

Just as growers whose eventual crops were greatly reduced are understandably tempted to view low yields as the cause of vintage 2017’s phenomenally high levels of dry extract, so some Rheinhessen growers attribute this vintage’s otherwise inexplicably high acidity to shutdown. The latter hypothesis is slightly more persuasive than the former. But in fact, vineyards that experienced normal yields in 2017 also rendered wines with huge extract, and similarly, vines that ripened fruit at an accelerated rate and gave no appearance of having been interrupted by shutdown still generated wines with high acidity. And in some Rheinhessen sectors – notably the Wonnegau – there was enough precipitation in late July and early August to definitively ward off shutdown. (For more on what might lie behind vintage 2017’s high extracts and acidity, see my survey of both 2017 and 2018 as “Vintages of Mystery.”) Another plausible hypothesis concerning vintage 2017 is that drought stress reduced yields due to loss of moisture in the grapes. But those grapes would have had a chance to rehydrate thanks to significant rain in the last days of August and in early September – rain whose timing in the ripening cycle is also a plausible explanation for high dry extract in the eventual wines, as it may have facilitated a load of mineral matter being conveyed to the fruit. 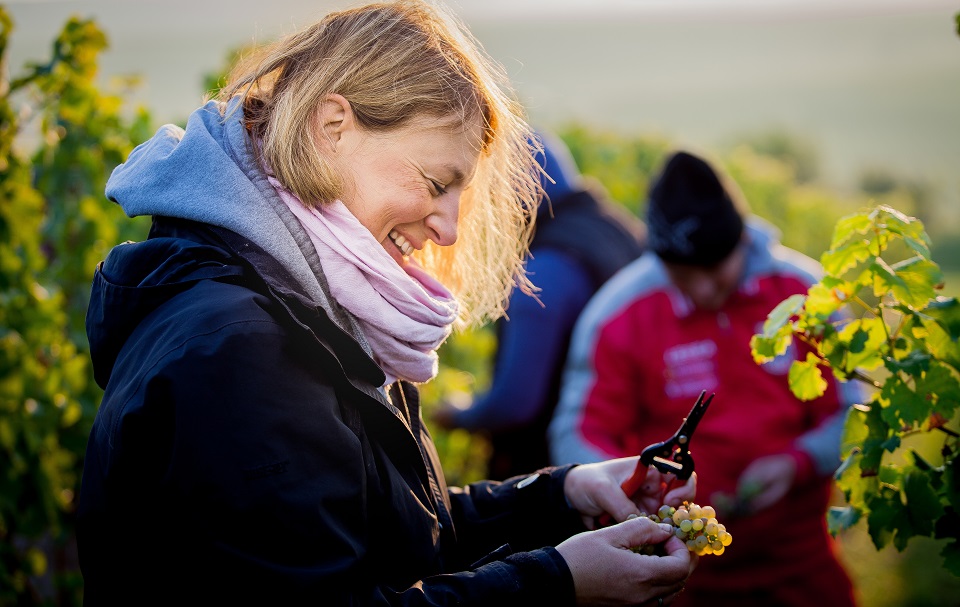 Julia Keller demonstrates one major reason why she and her husband Klaus Peter surmounted devastating August 2017 - picking apart clusters to ensure that only unblemished berries were crushed.

Westhofen was at the epicenter of a vintage 2017 tragedy: the August 25 hail that savaged vineyards, above all the prestigious Morstein, which had escaped the April frost. “The one stroke of luck,” reported Florian Fauth, “is that it was warm and dry for a week after the hailstorm, so that the damaged grapes largely dried up.” Even so, he added: “I’ve never experienced such a disturbing [aufregende] harvest. In some clusters, one side was completely destroyed while the other harbored healthy, intact grapes.” Surgical precision was required of Westhofen growers to salvage what little fruit remained unscathed, and even after such a tiny harvest, growers with the quality standards exemplified by Fauth sold off some of it as juice.

Harvest throughout Rheinhessen was extremely early by long-term standards, and for the most part rapid. That said, top growers, even in hailed-on sectors, were able to let their best sites hang through the chilly nights of late September and early October. “I had been afraid of a too-ripe vintage, with too soft an acid profile and too-high alcohol,” related Philipp Wittmann. “But curiously, the cool nights in September seem to have been sufficient to keep that from becoming the case. This was incredibly lucky.” Apropos of early harvest, it bears mentioning that Rheinhessen in 2017 offers a glaring example of the discrepancy that can exist between the quality that is statistically typical of a vintage and the quality that is achieved by a conscientious and demanding few. The elite of Westhofen with whom I tasted, for instance, testified that in the wake of the hail, most of their neighbors felt compelled to pick their Riesling in early September. That grape variety in particular had suffered damage to stems as well as berries, and for most growers an eventual meticulous hand-harvest would have been economically out of the question. 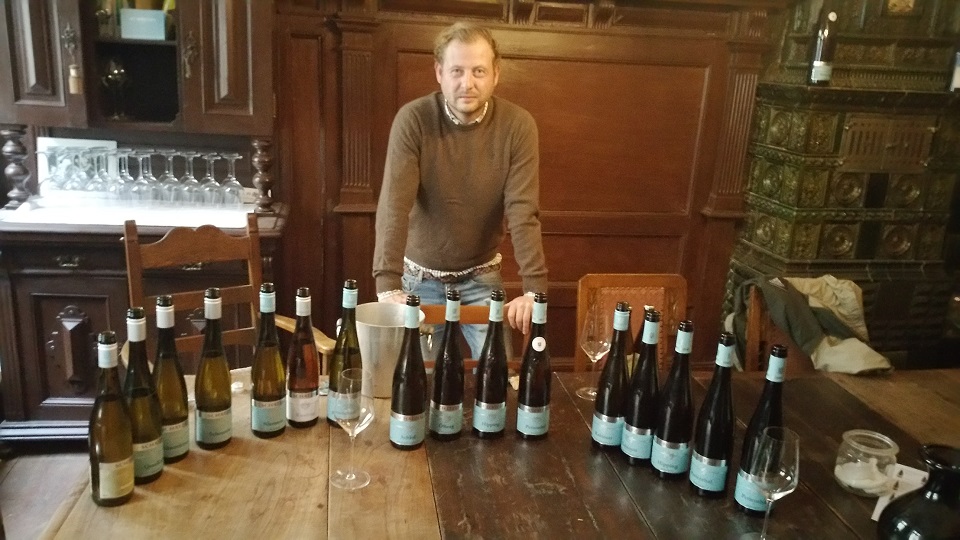 Nierstein grower Kai Schätzel's 2017 collection confirms his standing as a master of complex, remarkably lightweight Grosse Gewächse, one of Rheinhessen's most ardent advocates for residually sweet Kabinett, and a meticulous innovator in both the vineyard and cellar.

This report is based on visits with a dozen Rheinhessen growers in November 2018, the early start of harvest having thwarted my normal practice of tasting here in September. I canvassed wines from one additional grower as samples. Wines I rated 86 points or lower are generally not accorded a tasting note. I make exceptions to that rule for wines I still deem good values, or if I think a tasting note will demonstrate some important point (which might be that I think the wine in question is routinely overrated, or perhaps that its latest, disappointing performance requires explanation).

Vintages of Paradox & Mystery: A Preview of 2018 and 2017 in Germany and Austria, David Schildknecht, January 2019

Rheinhessen Riesling 2016: The Triumph of Subtlety, David Schildknecht, May 2018