Part One: Longuich to Lieser

The early budding and flowering of what looked destined to be an unusually large crop had growers hugely enthusiastic about 2014 up until August. A wet, cool June had set things back a bit but was hardly problematic. Rain in August, however, with temperatures remaining warm, quickly became a serious concern. Conditions were already ripe for fungal and insect pests since there had been scarcely any winter to kill off spores or larvae. When warm weather and periodic, at-times heavy, rains continued throughout September into early October, the stage was set for a battle against wasps, fruit flies and rot. The Mosel was especially rained on. Its Riesling’s slightly later ripening vis-à-vis other regions was not an advantage given that some of the heaviest rains fell in late September and early October. The result was that many growers had to choose between picking at marginal ripeness or risk wholesale taint of acescence (emergence of acetic acid) and rot. 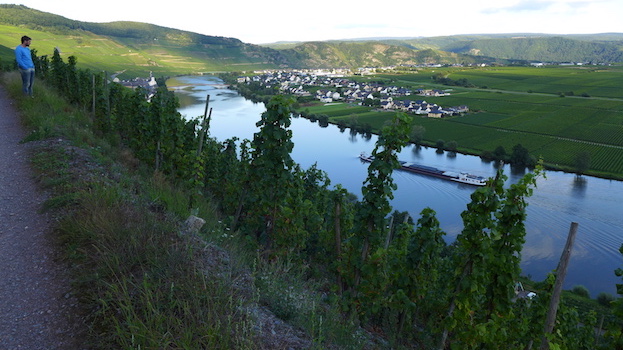 Julian Haart, responsible for one of the most exciting Mosel collections of the 2014 vintage, has lovingly and painstakingly restored these old vines in the Schubertslay, a vineyard within today’s Piesporter Goldtröpfchen.

Yet for all of this adversity, more than a few outstanding wines were rendered. In the words of Andreas Adam, one of the most successful Mosel growers in 2014, but echoed by many others: “I’m thrilled with how this vintage turned out; I just don’t ever want to have to relive it!” In part, success came because conditions varied greatly from one community to another, as this portion of my report vividly demonstrates. Some sensational wines emerged from Piesport and Dhron, while one bend of the Mosel and fewer than ten miles downstream, Brauneberger was hit by conditions as difficult as any experienced in Riesling Germany this year.

In part, too, success came because rain, rot and fruit flies could not defeat that archetypical German virtue Fleiss—sheer diligence even when the going gets tough. And it was easy to lose heart as a grower not to mention as a picker, struggling to determine whether the cluster in front of you harbors hidden rot, and, if your job is to be well done, having to turn each bunch in your hand looking for rot and smelling it lest it harbor acetic berries. “I’ll never forget catching my first glimpse of the 2014 Mosel harvest,” related Philipp Wittmann, who was headed to help his wife Eva finish the harvest after his crop in Rheinhessen was safely fermenting. “As I descended into the valley under dark skies I was shocked at what looked like a war zone full of desperate pickers."

Naturally, talent too played a role in success; but gut instincts were what many growers said they relied on. "I couldn't recommend any general strategy in 2014, that's for sure,” concluded Karl Josef Loewen of Leiwen, echoing comments made by many of his colleagues. Finally, technological and logistical issues cannot be overlooked. A skilled cadre of pickers, the more per hectare and sooner on hand the better, was an invaluable asset. Those with the capacity to cool their fruit before crushing it and with the ability to process it rapidly were also significantly advantaged. But rapid processing often demanded spare press capacity, and few growers can afford an extra press that might only get utilized in a year like this, when a substantial crop—because even allowing for necessary selectivity, yields on the Mosel in 2014 were generally ample—cries out for picking in half the usual time. 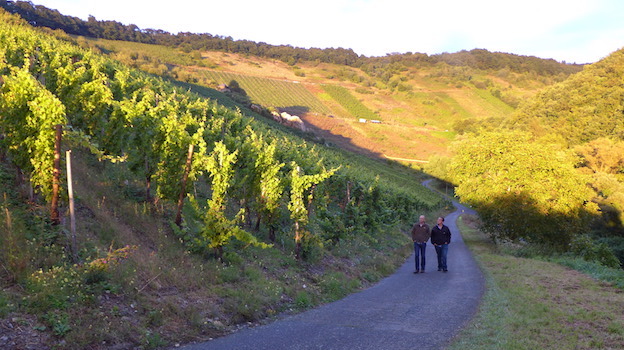 Stefan Steinmetz has continued to add sites to his repertoire, like the once-renowned Wintricher Neuberg (now officially within the Geierslay) through which he and Mosel aficionado Lars Carlberg are seen walking here. Steinmetz didn’t just surmount the challenges of 2014, he rendered his most exciting collection yet.

“If unhappy experience with 2013 made you nervous and led to an earlier picking of the 2014s, so much the better,” insisted Stefan Steinmetz. Modest must weights were conducive to making buoyant wines and complemented their generally prominent acidity. What I and many others would call “genuine Kabinett” Rieslings of under 10% alcohol yet with judicious and subtly supportive rather than blatant sweetness were possible in 2014 to an extent unprecedented in recent years, marked as those have been by a general warming trend. You would have been faced with uncomprehending stares if you had told any Mosel grower of 30 years ago that his or her 2014 counterpart might, like Andreas Adam, express pride in having harvested his Dhroner Hofberg Riesling Kabinett at “a mere 79 degrees Oechsle.” What’s more, the best of these Kabinetts accompany their levity with a clarity that’s remarkable considering the pressure and precarious circumstances under which they were picked.

To the extent that at some addresses the drier wines performed better than those with significant residual sugar, that should, I suspect, be chalked up not to any vintage-specific suitability but rather to the fact that a grower’s cleanest fruit had to be utilized for his or her dry wines, where any botrytis bitterness or hint of acescence would be most easily detected. The extreme dryness toward which many dry wines tended this vintage, presumably because the warm, wet weather promoted both a strong yeast population and lots of nitrogen to nourish it, was seldom problematic, since the best of these wines have abundant dry extract (another inevitable legacy of wet weather and consequent mineral accretion, slight dilution of must weights notwithstanding) as well as generous primary juiciness. Nor was alcoholic heat a concern given the vintage’s modest must weights. Naturally, the retention of botrytis-affected Riesling for sweet wines also reflects a venerable tradition. But the amount of truly unalloyed noble rot this vintage was tiny, and even among the handful of truly superb Auslesen rendered this year, some achieved their concentration with only a small contribution from outright noble rot. (The even fewer successful BAs and TBAs, to be sure, depended on fungal infection for shriveling.)

In general, the Mosel Rieslings of 2014 are not meant for long keeping. But there are some notable, even spectacular, exceptions. And I am sure there will be many others that make a mockery of my best attempts on this occasion to handicap their potential longevity. Be careful and diligent in monitoring the evolution of any that you decide to cellar, though, because ill effects of background botrytis or low-level acescence will often be masked at the beginning by the wines’ youthful primary fruit. On the other hand, do not on any account make the mistake of ignoring this Mosel vintage entirely, since certain collections, such as those of Andreas Adam, Julian Haart and Stefan Steinmetz reviewed in this article, include some truly supernal Rieslings. Because 2014 is known quite rightly as a difficult vintage and has been followed in 2015 by one of conspicuous ripeness and relative ease of success, chances are good that 2014s, quite possibly including some of the best, will languish on merchants’ stock lists for a long time.

Details concerning the sources of the present report and conventions observed in it as regards scoring and nomenclature can be found in the extended introduction to its counterpart covering the Rhine regions. And as in that earlier report, since my assessments of German Riesling are appearing in Vinous for the first time, I have taken the liberty of incorporating into most of my introductions to individual estates some general observations about recent trends and developments at the address in question. 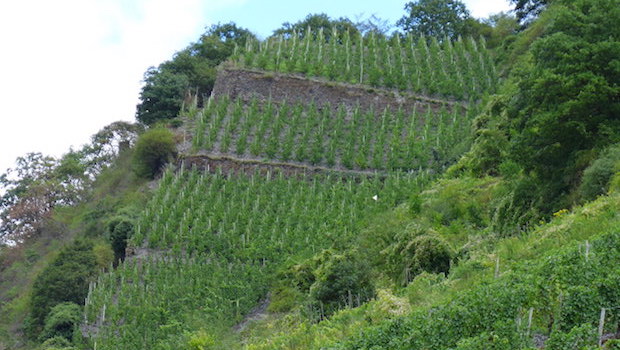 One convention observed in my reports deserves to be reiterated here, because it applies most often on the Mosel. If you encounter a reference in a wine’s description to “A.P. #” followed by one or two Arabic numerals, these appear solely in instances where a grower has bottled more than one wine under an otherwise identical description and the relevant wines’ registration numbers are thus the only means of avoiding ambiguity. Some growers utilize “cask numbers,” even if these no longer signify specific casks as they might once have done, as a sort of nickname. Occasionally the wine’s registration number will be featured prominently on a label as a “Fass Nr.” This practice can become confusing. Still, if such a designation appears prominently on the label in question I have included it as part of the relevant wine’s description.

Part two of this report on the Mosel will cover estates located along the stretch from Wehlen to Winningen. Naturally, since coverage is by estate and Mosel estates typically own vineyards in disparate, at times even far-flung villages, the two parts of this report are not strictly geographically divisible. And since two estates located in the Middle Mosel are also responsible for some outstanding Saar Rieslings, lovers of that region, to which I already dedicated a separate vintage 2014 report, should make sure to check out my reviews of Saar offerings from Nik Weis (St. Urbans-Hof) in the present report and those of Markus Molitor, who has just seriously expanded his Saar efforts, in my subsequent and final report on German Rieslings from the 2014 vintage.

Rescuing Ruwer Riesling in 2014 ... and Beyond, David Schildknecht September 2016

2014 Germany: Riesling Resists Rain on the Rhine, David Schildknecht May 2016