This year’s Penfolds collection consists of all of their icon bottlings, including a few surprises. The most significant are two new wines, Superblend 802-A and Superblend 802-B, both from the 2018 vintage. These are Cabernet Sauvignon/Shiraz blends, with the “A” (68% Cabernet and 32% Shiraz) raised in French oak and the “B” (55% Cabernet and 45% Shiraz) matured in American oak, in the classic Penfolds style. In 2017, the flagship Grange was made entirely from Shiraz, only the seventh time this has happened since the first Grange was produced in 1951. In addition, a Pinot Noir, Bin 23, from the Adelaide Hills, is now part of the collection, but production is still tiny.

Some of these bottlings have been among Australia’s most well-known and sought-after reds and whites for years, especially Grange, unquestionably Australia’s benchmark wine. China has been one of Penfolds’ biggest markets for the past decade but the current trade war and the ensuing tariffs (up to 220%), obviously mean that the Chinese allocation is going elsewhere, making these wines more available for now.

The 2021 Riesling Bin 51 might be the best version of that wine I have ever had. It is easily one of Australia’s best renditions of the variety. The 2020 Chardonnay Bin 311 offers excellent value while the 2019 Chardonnay Yattarna Bin 144 should be one of the longest-lived editions yet. The small-production 2020 Chardonnay Reserve Bin A shows a bit less tension than the Yattarna but it’s still built for aging. 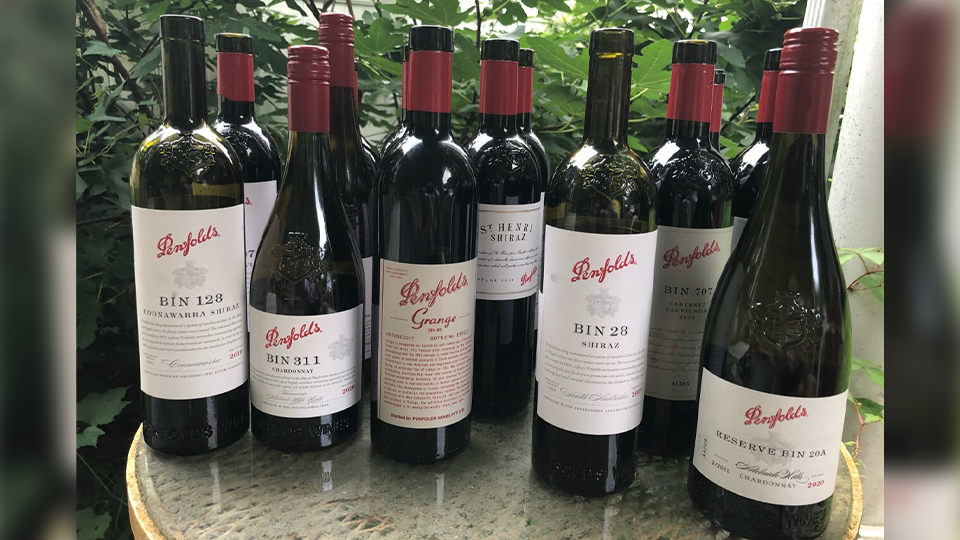 Fans of generous Pinot Noir will appreciate the 2020 Bin 23, a fairly new wine for Penfolds, which is made primarily from relatively young vines in the Adelaide Hills. Vineyards in Tasmania and Henty are also included in this vintage’s blend, most likely the reason for the wine’s fruity exuberance and welcoming texture. This bottling will no doubt continue to evolve in the coming years.

The entry-level Shiraz bottlings, 2019 Bin 28 and 2019 Bin 128, offer a good glimpse of the Penfolds approach at relatively accessible prices. These 2019s are both notably forward and juicy. The key, and major difference here, is that the Bin 28 is raised in used American oak while the Bin 128 ages in French oak barrels, 24% of them new.

I was surprised to learn that the expressive 2019 Bin 138, a blend of 70% Shiraz, 17% Grenache and 13% Mataro, wasn’t more Grenache-centered, given its juicy berry, floral spice qualities. It wouldn’t have shocked me to hear that there was twice as much Grenache than there actually is.

The Cabernet/Shiraz Bin 389 is usually referred to as “little Grange” because of its often very similar blend. But this 2019 could only be considered “little” by comparison to its esteemed big brother. The Bin 389 consistently stands by itself as one of Australia’s great red wines that can age wonderfully and can be a solid value in the context of the country’s highest quality wines.

The 2019 Cabernet Sauvignons Bin 407 and its big brother, Bin 707, are quite different in style. The 407 was raised in a combination of French and American oak, about 35% of it new, while the 707 was aged entirely in new American oak hogsheads, in the historic Penfolds tradition. The 407 will be long lived, no question, but the 707 demands patience. It’s one of Australia’s most age-worthy wines and definitely not made for readers with itchy corkscrews.

The 2019 Shiraz bottlings, Marananga Bin 50, RWT Bin 798 and Magill Estate, also differ in their oak regimens. Sixty-one percent of the Marananga blend was brought up in large American oak barrels, 32% of them new, and 39% in French barrels, of which only 9% were new. The RWT, on the other hand, was aged entirely in French oak barrels, 57% new and 43% one-year-old barrels. The Magill Estate was raised in large, new and used French and American oak casks.

The Shiraz St. Henri is a beauty in 2018. For a long time now an insiders’ bottling, the St. Henri is quickly becoming one of Australia’s most sought-after wines, especially for readers who are willing to keep it in the cellar. The St. Henri was raised in large, neutral American oak vats, giving it an unabashedly old school structure and expression. St. Henri can be a tough read when young, but the 2018 is pleasantly expressive, relatively speaking. Still, hands off.

The new kids in the cellar are the Superblend 802-A and 802-B. These Cabernet Sauvignon/Shiraz blends are meant to be high-expression, extravagant wines, much in the style of thesuper-modern Spanish "Alta Expresión" bottlings. As intended, these definitely stand out in the collection and make the “old” modern bottling, the RWT, seem traditional by comparison.

As noted earlier, the outstanding 2017 Grange Bin 95 is made entirely from Shiraz. It sets itself apart from most “classic” vintages as its quite forthcoming now, with a lot of aromatic complexity. The tannins seem friendly at first, but aeration brings them forward. I have no doubt that it will be drinking beautifully through and beyond its 30th birthday.

Rioja: The Past Is Always Present, Josh Raynolds, April 2021