Who doesn’t love an auction? The feverish atmosphere as zillionaires outwit each other via barely imperceptible gestures that silently drop another wad of cash for that treasured lot that must be obtained at whatever cost and mysterious anonymous telephone bidders that I imagine are hermit-like baddies from a Sixties Bond movie, holed up in their secret Alpine lair accumulating priceless works of art to enjoy once they have taken over the world. Then there is the witty repartee of the gesticulating auctioneer, breathlessly cajoling his audience to open their purses wider and smack of the gavel and the jubilant cry of “SOLD” upon which everyone exhales.

Auctions have been a fundamental part of the fine wine world since their introduction by the late Michael Broadbent at Christies in 1966. Dotted around the world, they are mountain springs from which mature wines flow into cellars, or languish unsold if the reserve is too high (or a Burgundy winemaker interrupts the bidding to allege fakery.) South Africa has its own annual auction that is perhaps less well known, but plays an important part in the industry and a vital role nurturing new talent.

The Cape Winemakers Guild was founded in 1982 to share and pass on knowledge and values to young aspiring winemakers. The Guild currently comprises 45 members that join by invitation only. I am not alone in claiming that just a decade ago, the CWG was staid in their selection and had begun losing touch with a dynamic wine industry. Perusing the latest list of members, I find familiar names such as Mark Kent of Boekenhootskloof and Pieter “Bubbles” Ferreira of Graham Beck alongside new talent such as Samantha O’Keefe of Lismore, Donovan Rall, Duncan Savage and not least the indefatigable Andrea Mullineux, the incumbent CWG chair. Apart from building this pool of knowledge and support they oversee two vital initiatives. Firstly, there is the Protégé Program, designed to nurture new talent irrespective of race or gender whereby final year students at Stellenbosch University and Elsenburg Agricultural College are invited to apply. Since 2006, 24 young people have passed a three-year internship, 16 of which currently hold roles in major wineries or have set up their own projects. There is also a Development Trust Program that since 1999 has helped train over 3,700 cellar hands. These have both played in important role in diversifying the wine industry and shifted it away from the stereotypical image of it being exclusively white and male. 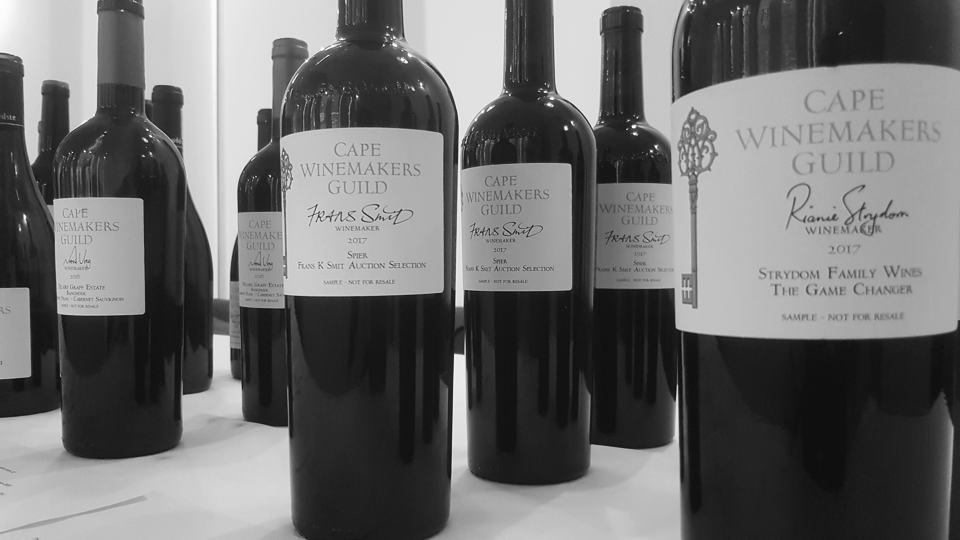 How to pay for that, after all, not a single Rand comes from the government’s coffers.

Well, there is sponsorship, but also an annual auction to raise money and show off their talents. Essentially, CWG members parse away a small part of their production, usually between one and four barrels. Either the cuvée represents the finest selection of barrels, not unlike the Goldkapsel system used in the German VDP, or to showcase an alternative cuvée outside their regular portfolio. In recent years, a market has built up around these items with some of the top producers’ CWG bottlings commanding hefty premiums.

This year, COVID clearly presented logistical problems and there were moments when it was in doubt. However, a solution was found whereby a Vinotheque auction of older vintages and mixed lots will take place online between 18 September and 3 October and on that last day, another auction of more recent vintages to be held through Bonhams.

These were shown at a tasting in London and readers will find my reviews of these wines, as Stephen Tanzer has done previously on Vinous. Two things that I took away from this tasting was the class of the whites on offer, echoing my own assertion that South Africa is fast-becoming one of the leading countries for white wines and, as if I need to repeat this, at prices that remain a fraction elsewhere. Secondly, it highlighted the bifurcation of winemaking styles between the new generation of winemakers and “old guard”. In a way that is reflecting the state of the South African wine industry at present. That does not imply that an established producer like Kanonkop oversaw a substandard CWG Paul Sauer, on the contrary, it is one of the best CWG wines this year. In fact, I found it slightly better than the regular bottling that by coincidence I tasted a few days earlier. But there is a marked and tangible difference between the heavier, more alcoholic offerings, that cater for a palate different to mine, and some of the more nuanced offerings from younger winemakers. Overall, I was generally impressed by the quality this year. Incidentally, all proceeds from the first lot of 6 bottles are being donated to Lismore’s Samantha O’Keefe, who lost her winery and home to bushfires at the end of last year (see my recent interview on Vinous Live).

These wines are available to bidders from around the world through Bonhams www.bonhams.com and of course, this year it is more important than ever as the industry struggles with the impact of COVID that affects not just the lives of the winemaker, but the families whose entire livelihoods depend on them.