Vines never mourn the passing of a winemaker. They stay rooted to the ground, oblivious to the loss. Without a moment’s pause they burst into life for another year, another vintage. L’Eglise-Clinet is no exception. However this year those vines will bear fruit without the man to whom they are indebted, Denis Durantou. After months of illness, Durantou finally succumbed last Friday - a winemaker gone far too soon. Pomerol will never quite be the same again. 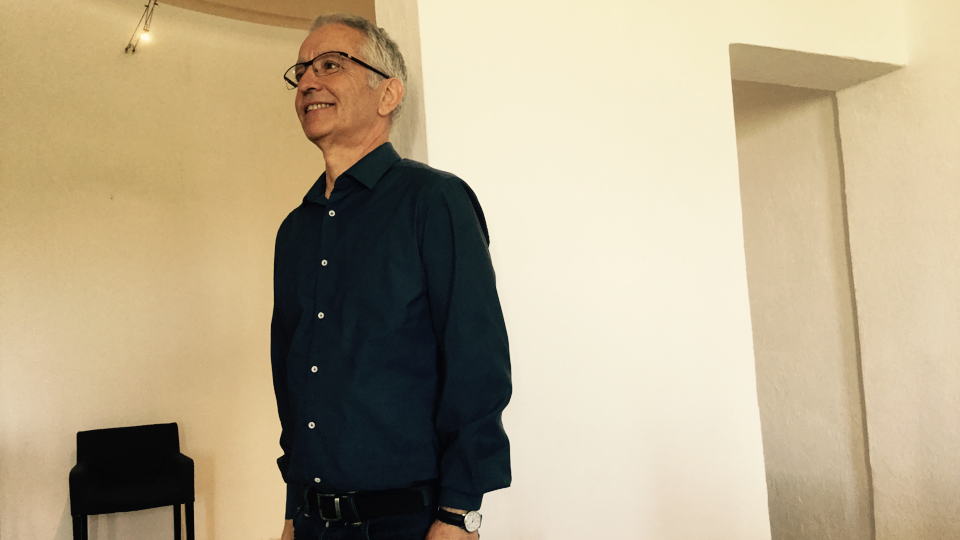 I cannot remember when I took this picture of Denis Durantou, but I do remember asking him to pose as if standing to attention. He kept laughing trying to keep still.

Denis Durantou was born in 1957 in Perigueux. His father, Jacques, was a high-ranking civil servant assigned to positions around France, therefore he appointed Pierre Lasserre as régisseur to keep his small vineyard in Pomerol ticking over. Skipping a generation only piqued his son’s interest in winemaking, one that dovetailed into a budding passion for French cuisine. Durantou’s vinous epiphany came when his grandfather René offered his nine-year old grandson a sip of the 1929 l’Eglise-Clinet. “It is because of that I make wine,” Denis once confided. As a teenager he helped construct the concrete vats and during military service he became an outstanding swimmer – he was always a sporty type, what you might call a “pocket dynamo”. But the vines were calling. After oenological studies at the University of Bordeaux Durantou worked alongside Lasserre who reasonably enough had designs to purchase the vineyard himself. His apprentice could only watch from the sidelines, although this seemed to strengthen his resolve to take charge at l’Eglise-Clinet and restore a Durantou at the helm.

Durantou finally entered l’Eglise-Clinet in 1982 and was fully responsible for the following vintage. By that time the property was pretty run down: earth instead of concrete floors and barrels long past their sell-by date, not to mention a vineyard pot-marked with missing vines. I once asked his recollections about his inaugural vintage. “I was a bit nervous, of course,” he replied. “The 1983 was picked during a heat wave and the wine was fermented in concrete tanks without a coil inside to control the temperature. I spent the nights pumping the must though an old coil dunked in icy water. But I also have a lot of good memorie, as my wife Marie [Reilhac] decided to come and live in Pomerol with me.” He was ostensibly starting from scratch. With a measly income from a wine sold for a handful of francs, it took years to gradually reconstitute the vineyard and modernize the winery.

The 1985 l’Eglise-Clinet signaled that the young vigneron had talent, if not yet all the means to create a top tier Pomerol. It was the 1998 vintage that put both l’Eglise-Clinet and Denis Durantou on the map, partly thanks to his newly installed smaller stainless steel tanks. I remember tasting the 1998 from barrel during one of my early primeur visits, the excitement in the air as Denis Durantou was congratulated for making a wine that set the template for what followed. From that pivotal vintage onwards l’Eglise-Clinet ascended to become one of Pomerol’s most acclaimed wines, quintessential and uncompromising, a wine that is not necessarily flattering in its youth, but that blossoms into an extraordinary and often profound elixir with bottle age. Flanking his crown jewel were a handful of crus such as La Chenade, Saintayme, Montlandrie and Les Cruzelles from outside Pomerol, over-performing and you might well argue, underpriced, not that he cared about something as banal as the market value of his wines. He just wanted people to enjoy them.

Denis Durantou was a sensitive, compelling and complex man. People often band around the word “passion” with respect to winemakers. His was all consuming, an obsession that easily weighed upon his quicksilver mind. I remember one primeur when he was dissatisfied with the barrel sample. He darted back and forth with samples from different cooperages until exasperated, I stopped typing and told him: “Look, it doesn’t matter where the sample comes from, it’s still a bloody great wine Denis.” He smiled and replied: “Yes, I guess you’re right”. But I could tell he still wasn’t happy. Of course he balanced this burning obsession with his family, his wife and three daughters, Alix, Noemie and Constance. Constance remembered how her father was restless to return to his vines during rare family holidays. From time to time Denis found himself in a dark place. Being such a perfectionist, he found it difficult to delegate responsibility and felt he had to control every last detail. Then he questioned those decisions. Did I do the right thing? Could I have done it better? Winemaking can sometimes be a lonely job and since, unlike many absentee owners, Denis actually lived in this sparsely populated rural part of Bordeaux, niggling matters could become irrationally magnified in the silence.

Denis Durantou was fundamental to my professional career in wine. I would not be where I am without him. In the salad days of my career, when he spontaneously leapt into a ditch to extract a clump of glutinous clay when I asked about terroir, I immediately recognized a true vigneron without all the gloss and sheen that often accompanies Bordeaux winemakers in their tailored suits and ties. Denis never liked the glitz and glamor that pervades the top châteaux and the marketing of their wines. He had grit under his fingers. When I had a hair-brained idea to start a website back in 2003, he was the first winemaker to send words of encouragement and, in that respect he never ceased, right up until the end. I always looked forward to tasting in his spartanly furnished tasting room, its whitewashed walls adorned with his artist wife’s latest collection of paintings. Before tasting we sometimes exchanged CDs, though I never warmed to his compilation of “Bordeaux Rock”. That was the same visit when I mentioned that I had never visited Lafleur. He immediately telephoned his friend Jacques Guinaudeau and within minutes we had driven round the corner to the château for an impromptu vertical. 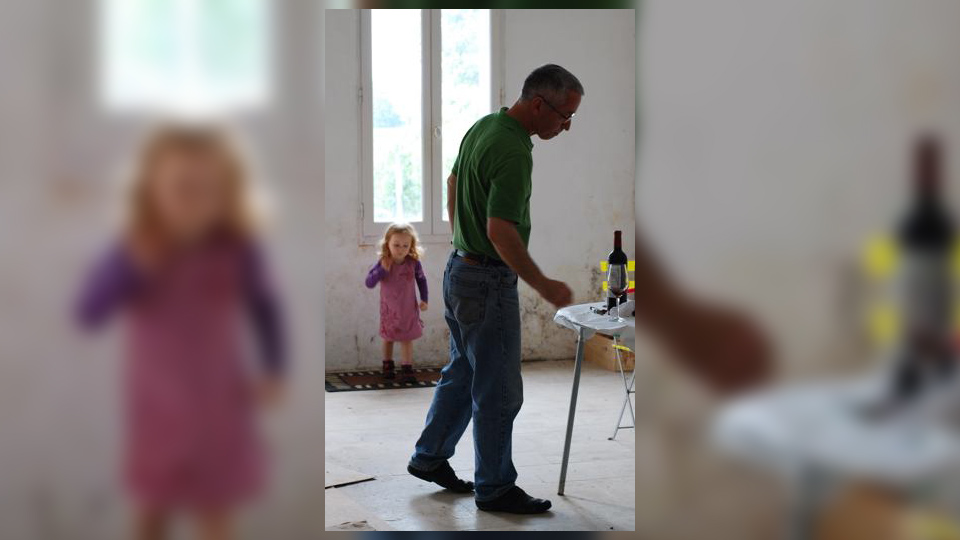 Denis and his young assistant, Lily Martin, when we popped in to visit l’Eglise-Clinet in autumn 2007.

During a family vacation in 2007 we dropped in to pay a visit. Whilst he escorted two-year old Lily into the vines for her first lesson in viticulture, he left me savoring a bottle of 1966 l’Eglise-Clinet. When my tome on Pomerol was a nebulous idea, Denis immediately e-mailed unpublished information on his family history that put the bit between my teeth and motivated me to plough on with the project. Later on, after a rather “liquid” lunch in Libourne, I asked him to draw a map of the vineyard for my book. It wasn’t quite up to scratch. The following day I showed him his unintelligable “map” and cheekily asked if he recognized the Pomerol vineyard. He shrugged and said had no idea. “It’s yours,” I replied. He laughed and grabbed a pencil for a second attempt. Over the years I have been privileged to attend memorable tastings: one at the winery focusing on experimental micro-vinifications of his beloved Cabernet Franc to compare clonal material, another juxtaposing bottles against magnums and in 2012, a dinner that culminated in his last marie-jeanne of 1929 l’Eglise-Clinet (though the otherworldly magnum of 1955 proved to be the highlight.)

Denis Durantou was a force of nature: alert and edgy, his mind never switched off. He was inquisitive and above all, immensely kind. He was opinionated, did not suffer fools and could have a short fuse (I was party to several tirades against wines he abhorred, even taking the worst to a lab for analysis.) He is so inextricably linked to his vineyard that now I cannot picture him anywhere other than among the vines or the tasting room. Last year our illnesses coincided and so we did not see each other for a few months. When I saw him again and I was on the road to recovery, it was clear that Denis Durantou had a far tougher road ahead. But he was a fighter. He steadfastly never disclosed his disease to anyone apart from his immediate family and his messages to me up until the end of February read as if primeur would go ahead as normal. 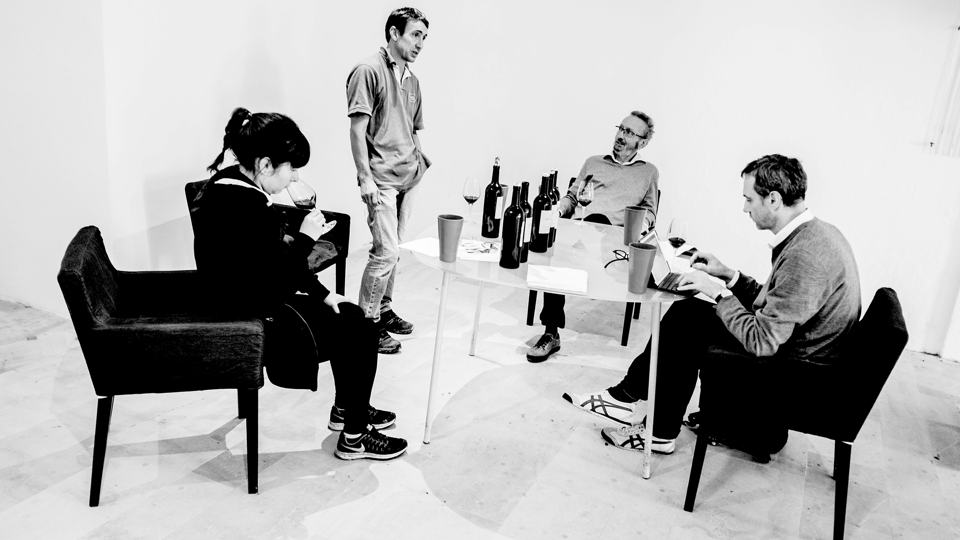 My last visit to l’Eglise-Clinet in September 2019 with his daughter Noemie on the left. Denis had to sit down but if my memory serves me well, he was as opinionated and garrulous as ever. Copyright Johan Berglund.

Denis’ daughter Constance telephoned me last Friday morning with the news that I had dreaded. We shared memories and though we have never met, I could hear a lot of her father in the impassioned manner she spoke of continuing L’Eglise-Clinet as a family concern. As she told me, the terroir has not changed. They need to articulate it as her father would have done. It will not be easy for his daughters to carry the baton, on the other hand, neither was it when Denis began himself.

Vines never mourn the passing of a winemaker. No, they impel the next to wipe away the tears and pick up the secateurs. Maybe that’s a good thing. Death does not stop the flow of time. Nature presses on. No choice but to keep busy and stay focused on the future. Despite everything the vines need someone to roll up their sleeves and nurture them through the season and all the way to bottling. Constance told me that she still hears her father’s voice as clearly as ever. I suspect that’s what he is saying. Irrespective of the sadness you feel, the story doesn’t stop here. It is a cliché, I know, but his spirit will be an eternal presence at l’Eglise-Clinet. His passing will not hit me until the next time I visit and he’s not standing outside the tasting room with a smile and glint in his eye. But his daughters will be there. I look forward to that time when we can raise a glass to the one and only, Denis Durantou.