The Willamette Valley’s winning streak, which has seldom been interrupted for almost the past two decades, continued through 2019, a year that has produced some epic Pinot Noirs of noteworthy elegance and energy. This is truly a golden age for high-quality Pinot Noirs from across Oregon. One could convincingly argue that the last six vintages, from 2014 through 2019, produced many of the greatest wines to ever emerge from the state. 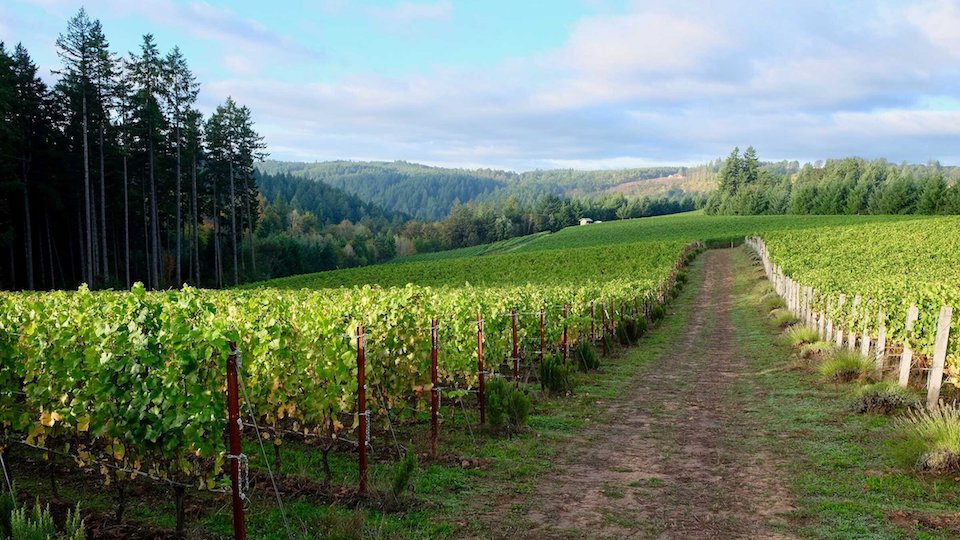 Mike Etzel's Sequitur Vineyard, in the heart of Ribbon Ridge, is still relatively young but it already shows superb potential, in his hands as well as those to whom he sells fruit.

Unlike the preceding vintages, the 2019 growing season started off cold and rainy, but the weather slowly warmed up, and spring temperatures were relatively normal. Conditions were on the cool side in some areas, notably the Eola-Amity Hills, which always enjoys the chilly Pacific Ocean winds. It was also rainy at times across the Willamette Valley, with a few isolated frost episodes but nothing overly dangerous or destructive. Abundant rain fell in late June and early July, which slowed down ripening while accelerating growth and increasing disease pressure, especially mildew. But well-managed vineyards, which happily tend to be the rule here, made it through with relatively little serious damage aside from reduced yields because of conscientious crop-thinning. There were no heat spikes, thankfully.  August was very dry, and temperatures remained fairly cool. Periodic humidity kept growers on their feet as plenty of diligence in the vineyards was essential. Well-timed rain in early September slowed things down, carrying the cool weather into October and ensuring that sugar levels wouldn’t run away while healthy acidity levels were maintained. Harvest began for most growers in the last week of September. The late harvest resulted in increased complexity and depth of flavor in the wines, but not at the expense of freshness and energy. The only downside is that it was a small crop, marked by lots of small berries and clusters. Brightness and elegance are the key words for 2019, a year that some producers have described as a throwback to the old days and style, before the hot vintages started stacking up. 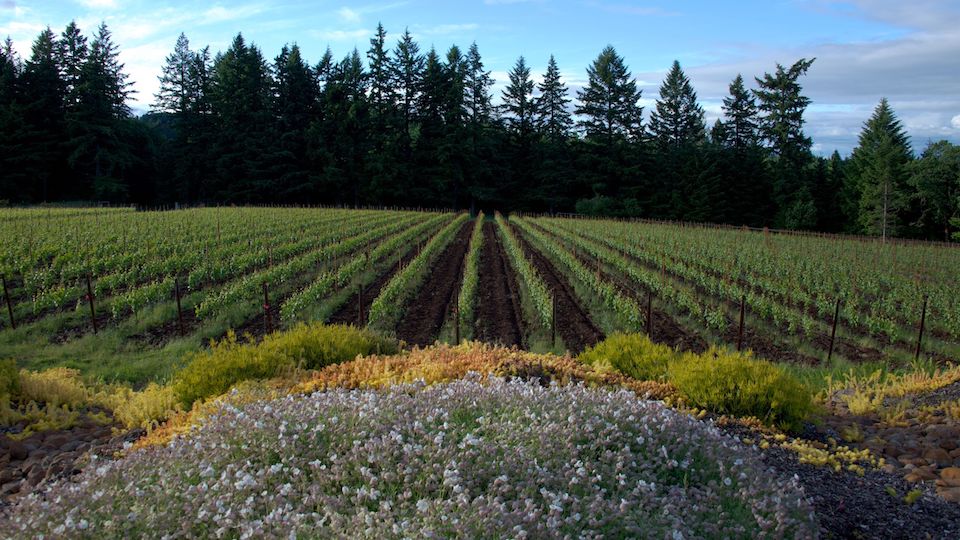 Springtime in the rolling terrain of the Chehalem Mountains.

Two thousand-eighteen started with an abnormally cold, late winter and early spring, with more rainfall than usual. Bud break finally occurred around mid-April. Weather warmed up quickly, which allowed the vines to catch up at a steady pace. Much to everyone’s relief, fruit development and ripening proceeded as normal. The growing season was warm and dry, with lots of sunshine but happily, few heat spikes. The arid conditions, which have become the norm in recent vintages, served to slow down plant metabolism, prolonging the phenolic maturity curve and increasing the complexity of the resulting wines. Toward the end of August, as harvest loomed, the region enjoyed days with temperatures in the low to mid-70s and nights in the mid-40s in many areas. There was also a bit of refreshing and well-timed rainfall throughout early September. Fruit was mostly picked at relatively high sugar levels but with healthy or even high acidity. In tasting, the 2018s tend to be deeply colored and show very good ripeness and generous character. The overall impression of richness is especially apparent when comparing the wines side by side with their 2019 siblings.

I wrote in August 2020 that the 2017 vintage has turned out to be a noteworthy vintage for the great number of bright, well-structured wines that were produced despite the hottest August in Willamette Valley history. The best wines show unlikely energy for such weather conditions, offering well-concentrated red and blue fruit, strong floral and spice notes and well-knit tannins. Most of the 2017s that I tasted for this report are late releases, either from wineries that chose to give their wines some bottle age before being released or those that saw longer barrel aging than is typical. These new releases tend to be a bit richer than the 2017s that I reviewed in my last report, and it does look like many of the wines are putting on weight, though not at the expense of energy. I think that this vintage will age quite well and wouldn’t be in a hurry to pop corks any time soon.

Revisiting a number of 2016s, I have found that many of the wines have deepened in character, taking a turn toward darker fruit while maintaining energy. Overall, the wines, have very good structure if not to the extent that the 2015s show. Generally speaking, the tannins are slowly integrating with the lively fruit, which is at no risk of dropping off. Some secondary qualities are emerging, especially in the aromas of the entry-level bottlings; however, most of the wines seem to be aging at a relatively languid pace, especially for a ripe vintage. 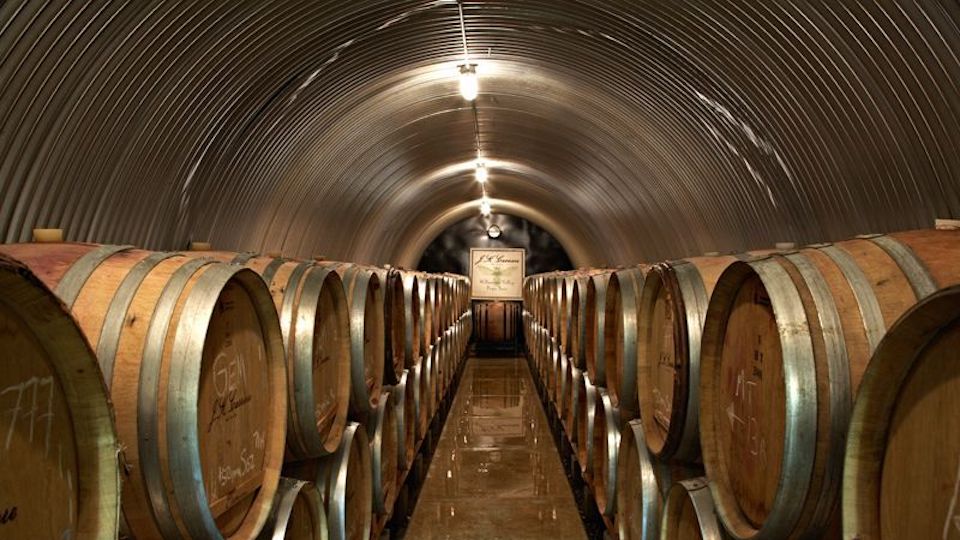 A potentially great vintage in the Willamette Valley took a severe turn for the worst when damaging wildfire smoke descended on the vineyards on September 12th. Any fruit picked before then was likely healthy, if less than ideally ripe in some cases. Pretty much all of the white grapes had luckily been harvested, but numerous producers opted not to make any red wines at all from the Pinot Noir crop and simply walked away from their fruit. Others tried to make the best of a dire situation and sold off their grapes or wine in bulk, or de-classified/blended everything into a single bottling, or created a low-priced, second label to move the wine quickly through the market. Many others opted to make a pink wine, with a fast pressing of the grapes to avoid as much potential smoke taint as possible. Several of the rosés that I have tasted have been quite good.

Unfortunately, I can attest that those fears about the smoke effect on Pinot Noir in 2020 appear to be well-grounded, at least based on what I have seen so far.

Detecting the effects of smoke taint in a young wine, especially one that is or was aging in – much less fermented in – barrels made from toasted oak is extremely difficult. Usually the only giveaway, for me, is a feeling of flatness on the palate, often accompanied by strong bitterness on the finish. That’s especially true for wines that are still in barrel as well as those that have recently been bottled. Is it smoky because of the barrel or because of, well, the smoke? The effect of smoke taint is far more pronounced on the palate than it is on the nose. The volatile phenols of the smoke are absorbed by the grapes and bind with the glucose, but there is no immediate, detectable expression of aromatic smokiness. But what happens in the mouth is another story. Enzymes in saliva split the volatiles phenols from the glycosides, meaning the smokiness from the fruit, and the taint can be detected, often dramatically so. In my experience taint becomes more pronounced as the wine ages. That is a very rough description of what happens. I readily admit that I am no scientist, so curious readers should dig into the widely available research and resources that can be found on Google for more authoritative (and educated!) descriptions. It’s still early days for tasting most of the wines from the best and most conscientious producers, so an open mind is in order, but readers should make every effort to sample wines before buying them. If there was ever a vintage to not buy blindly, this is the one. 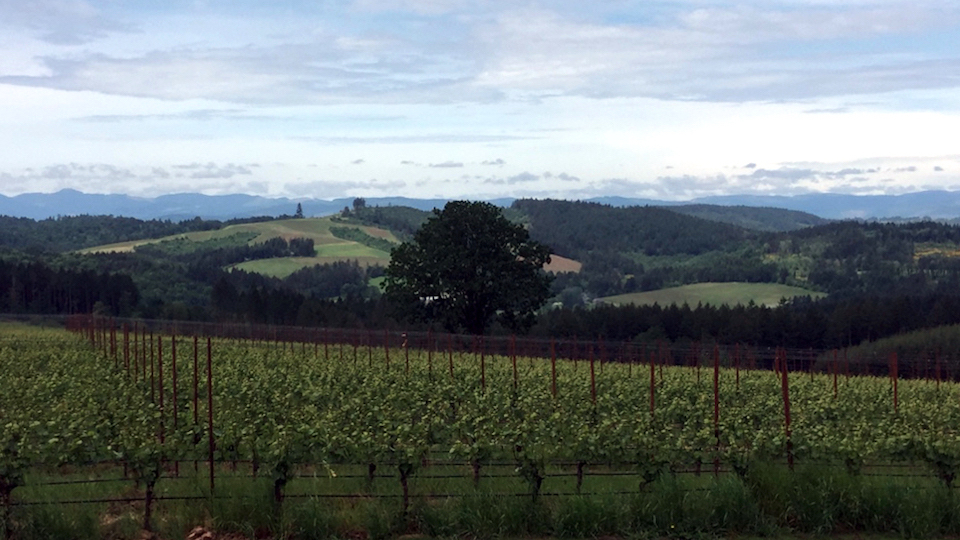 A tiny AVA that abuts the Chehalem Mountains, Ribbon Ridge is home to some of the Willamette Valley very best vineyards and most respected wineries.

The upward spiral of prices for top-notch Pinot Noir, from anywhere, just doesn’t seem to let up. In fact, it appears to be accelerating, and Oregon is no exception to the trend. While many of the highly sought-after Pinots from the top California regions of Santa Barbara County, San Luis Obispo County, the Santa Lucia Highlands and the entirety of the North Coast make several top-drawer Willamette Valley Pinots look like serious bargains by comparison, an increasing number of wineries here are testing the upper limits of pricing. Almost all these bottlings are made in minuscule quantities, often as few as three to five barrels, and even less than that in many instances. Still, compared with nosebleed-priced California Pinots, they very often deliver fine relative value.

Because so many producers will be making fewer Pinot Noirs than usual from 2020 – many will make a single bottling and just as many are liable to not bottle anything at all – my next report will be much smaller than in the past. It will include some late-release 2019s and early-release 2021s. On that note, from early reports in the Willamette Valley, 2021 is shaping up to be an outstanding vintage, which will hopefully ease some of the ongoing pain caused by 2020.

I tasted most of these wines over the last few months in New York and the rest during a quick trip to the Willamette Valley in late November of 2021.

Oregon: An Embarrassment of Riches and Richness, Josh Raynolds, June 2019