Oregon Outside the Pinot Noir Box

For many wine lovers, Oregon, and especially the Willamette Valley, is all Pinot Noir, all the time. Perhaps no other region in the New World is so closely associated with a single variety. And yet there’s so much more happening here, especially with Chardonnay. White wine and reds not made from Pinot Noir are approaching almost half of our annual Oregon coverage, which is a remarkable development over the last decade.

The last five vintages, which have been uniformly excellent in Oregon, presented winemakers with a golden opportunity to produce truly world-class wines from all varieties, and they responded with impressively consistent aplomb. Chardonnay, in particular, has become a deadly serious subject for the state’s growers and winemakers, as evidenced by the sheer number of outstanding renditions of that variety that I have been sampling recently. While Chardonnay (along with every other variety, for that matter) has long stood in the shadow of the omnipresent Pinot Noir, that’s emphatically no longer the case. The best examples – and their number is growing exponentially – deserve to be compared to top California bottlings, and, for the time being at least, they mostly deliver similar quality and complexity at relatively lower prices. I suspect that will be changing, though, as wine lovers notice what’s going on here. 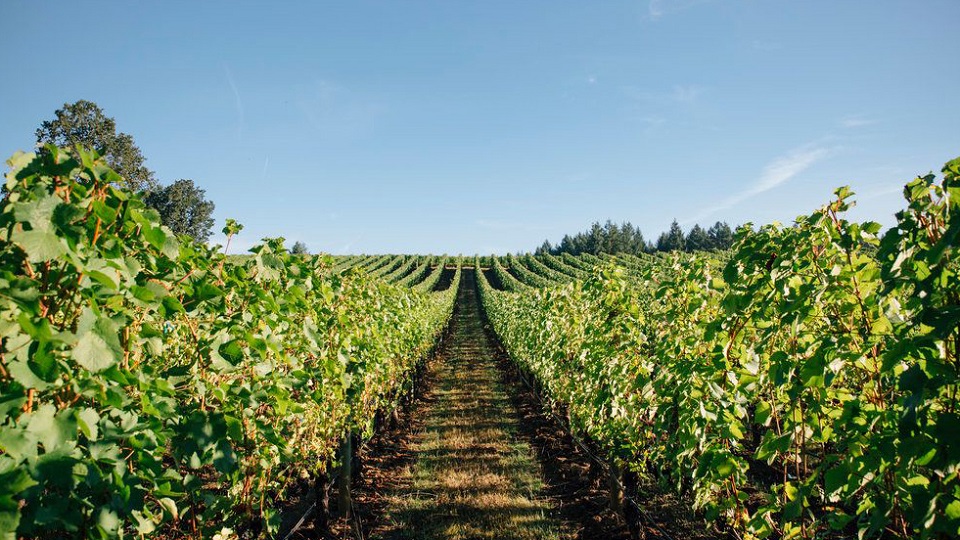 Some of Oregon's finest and most graceful Chardonnays are grown in the compact Ribbon Ridge AVA, which lies within the Chehalem Mountains appellation.

Two thousands-sixteen presented the Willamette Valley with more classic weather conditions than 2015 and 2014. There was an early spring, with budbreak mostly occurring three weeks ahead of schedule. A hot May accelerated the vines’ growth, while June, July and August brought moderate and often cool conditions, and then things heated up again the last week of August. Thanks to the temperate summer, acidity levels in the fruit remained high, while sugar levels stayed on the low side. Grapes were generally smaller than usual, and the clusters were made up of plenty of hens and chicks (a mix of large and small berries that the French call millerandage), which results in wines of both ripeness and freshness. Harvest began at the end of August in many cases, as the weather took a warmer turn. Things really started to heat up around mid-September, but by then most of the fruit was already in.

In 2017 there was abundant rain throughout the spring and into the beginning of summer, and conditions were often quite cool, which set the stage for wines marked by energy and freshness. And that’s exactly what the winemakers produced, despite some heat spikes during the summer. These are classically built, lively whites that emphasize detail and delicacy over richness and power, but they in no way lack for flavor intensity. I suspect that many of the Chardonnays will be quite long-lived, although their vibrancy makes them pretty compelling right now. Fans of Old World renditions of the variety are going to find plenty to like, and I’ll bet that these wines are going to turn quite a few heads, if they haven’t already.

A cold winter in 2018 was followed by lots of early spring rain. The weather warmed up in May and then took a distinctly hot turn in June. High temperatures continued through August, with basically no rain, but there were no dangerous heat spikes to accelerate sugar levels or cause dramatic loss of acidity. It was colder in September, with notably chilly nights, which slowed down ripening, much to everybody’s relief. Invigorating rain in the middle of the month relieved and energized the vines at just the right moment, allowing harvest to begin in the third week of the month. While the wines are mostly deeper and more fruit-driven than their 2017 siblings, they are by no means brawny or marked by overt ripeness or richness. In most cases the wines will show very well on the young side, and while they may not age as long or as gracefully as those of the previous vintage, that’s a matter of little importance to the vast majority of Chardonnay drinkers who enjoy their wines before their fourth or, maybe, fifth birthday.

The Willamette Valley is blessed with a lot of old Chardonnay vines, since most of the pioneering vineyards were planted with it alongside Pinot Noir. Unfortunately, but not unexpectedly, Pinot’s success was Chardonnay’s loss starting in the 1980s. Many of those original Chardonnay vines were replanted to Pinot to accommodate market demand, and production of serious versions of Chardonnay quickly diminished, which no doubt helped to push the wines deeper into Pinot’s growing shadow. There were a handful of outstanding Chardonnays being made by dedicated wineries, but compared to Pinot Noir they represented quite literally a drop in the bucket.

Most of those old vines were and are from the Wente clone, which made its way to Oregon during the initial plantings of the mid- to late 1980s. Later, Dijon Chardonnay clones, which are generally earlier-ripening and higher-yielding, became the norm, and while some outstanding wines were being made here and there, they got little love from consumers, which was probably not a concern for producers as so little wine was being made, at least compared to Pinot.

Much of the Chardonnay that was coming out of Oregon in the 1990s and 2000s was, frankly, unexciting. High yields took precedence over quality as most of the wines were viewed as cash cows, albeit small ones, and the variety was scarcely found in the national marketplace. What consumers did find was, with rare exception, innocuous and thin, or over-oaked and under-flavored, which did little to enhance the variety’s image for most domestic Chardonnay drinkers.

The first indications that change was afoot began in the late 2000s and early 2010s. Growers and attentive winemakers knew the region had enormous potential to produce great Chardonnay, and a brave few started making the effort to take advantage of that fact. As the decade continued, examples of truly fine Chardonnays turned from a trickle into what is now a steady and growing flow. More and more top sites are being planted to the variety, often with stunning success. Overt oak influence is seriously declining, thankfully, and more time and care in the vineyards and cellars has resulted in wines of real concentration as well as complexity. The market is definitely taking notice. 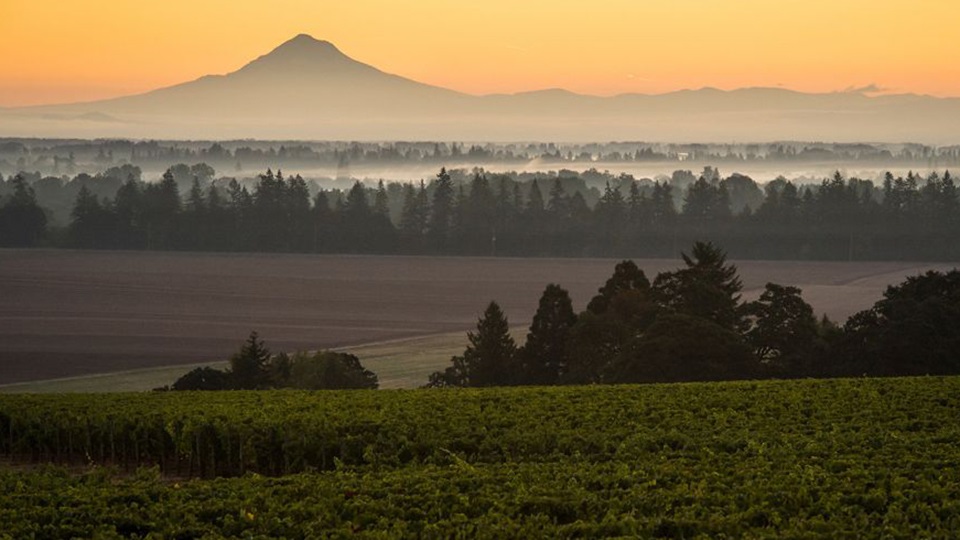 Thanks to its cool, ocean-influenced climate, the Eola Amity Hills is the source for white wines of distinct freshness and balance.

Getting Serious, Slowly, with Other Varieties

Pinot Gris has a long history here, as scattered plantings of the variety existed alongside Pinot Noir and Chardonnay in the 1960s and early 1970s. But it was the rare instance when wineries gave it much if any real love. A number of producers still refer to Pinot Gris as “an invasive weed,” and given the blandness of most examples into the 2010s, such derision isn’t unexpected. The number of fine Pinot Gris bottlings is slowly growing, but at a far slower pace than that of Chardonnay.

Pinot Blanc, which was also planted here and there in the early days, is now being taken seriously by a few wineries, and based on what I’ve seen recently, it shows great potential. Unfortunately, the wines will likely never command the prices of Chardonnay, or even Pinot Gris, so for now, truly top-drawer Pinot Blancs will continue to be rare birds.

One of Oregon’s best-kept secrets is still Riesling. Some of the best New World examples of the variety are being produced here, in both dry and less-dry iterations. Those made by Trisaetum and Brooks, for example, have been truly stunning in the 2010s, a fact not lost on forward-thinking sommeliers across the country who have become strong advocates for the wines thanks to their purity and fine detail. I strongly urge Riesling-loving readers to give these wines a shot, as I think that they’ll be highly impressed, even when to comparing them to the benchmark Teutonic versions.

More obscure white varieties such as Melon de Bourgogne, Sauvignon Blanc and Gewürztraminer are still a presence in the Willamette Valley, but their production is usually so minuscule that they are pretty much winery-direct bottlings, with small though often dedicated audiences.

In the southern Rogue Valley, there’s some real excitement around Viognier and also Marsanne and Roussanne, but the latter two varieties are still scarce. Given the region’s success with Syrah and, increasingly, Grenache, this won’t come as a surprise. I’ve seen an increasing, well-deserved interest in the wines outside of Oregon, but finding them continues to be a task best accomplished by sourcing directly from the producers. The wines lean to the lively, Old World side, and pricing is generally quite fair given quality.

Syrah has emerged as a serious, if obscure, wild card in Oregon, and while there are still just a few examples being produced, some of them are among the best the New World has to offer. Gargantua, a new-ish project from Josh Bergstrom, of Willamette Valley Pinot Noir (and Chardonnay) fame, is producing a truly stunning Syrah, as are Amalie Robert, Cristom and Penner-Ash. Then there’s the Rogue Valley, which, as I noted above, is solidifying itself as an attention-worthy source for Syrah, especially at Cowhorn. 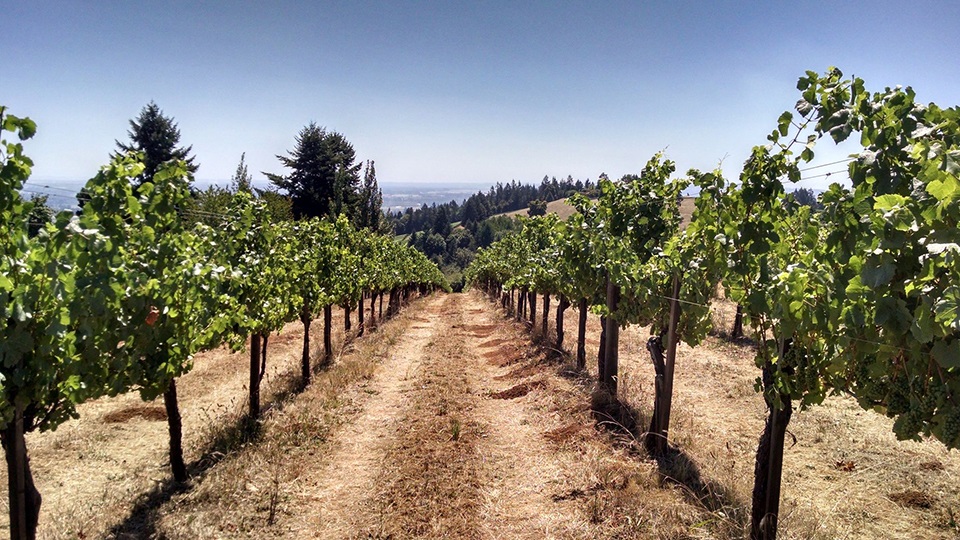 The first vines planted in the Willamette Valley, in 1965, were in the rolling Dundee Hills and many still survive and produce some of Oregon's top Chardonnays.

Recent vintages have presented me with the opportunity to taste some outstanding examples of Willamette Valley Gamay, usually sourced from small, old plantings, mainly in great sites. The wines are generally more generous in style than those of Beaujolais, but still vibrant and well-delineated. Production is tiny, but these are definitely worth the search, which is probably best approached by contacting wineries directly.

Pinot Meunier, a cousin of Pinot Noir, is a no-brainer when it comes to potential in the Willamette Valley, and the examples being made by Eyrie and Amalie Robert speak to the great possibilities that exist here. But given market realities, I’m not holding my breath that many growers will soon turn much of their attention to this variety at the expense of Pinot Noir.

There’s a fairly long history of Méthode Champenoise sparkling wines in the Willamette Valley, led by Argyle, which was and continues to be the pace-setter for high-end, high-quality bubbly in the region. Over the last decade they have been joined by a number of other noteworthy producers, such as Soter Vineyards (who have been at it for some time), Pashey (from Trisaetum), Brooks, Flâneur, Kramer and Roco, which is produced by old-timer Rollin Soles, the original winemaker at Argyle. All are worthy of attention. Willamette Valley Vineyards is taking a big plunge into the category with a new facility dedicated to sparkling wine, so I’m sure we’ll be seeing an increasing presence of these wines in the coming years.

The sheer number of noteworthy non-Pinot Noir wines from Oregon continues to grow exponentially every year, this one being a prime example. While many of them are made in highly limited quantities there are scores of them that are worth hunting down, especially for readers who favor wines of energy and detail. As with Pinot Noir, this is truly a golden era for Oregon wine of a wide range of varieties and things don’t seem to be slowing down.

Oregon: An Embarrassment of Riches and Richness, Josh Raynolds, June 2019