We are thrilled to announce the return of live events and a new edition of La Festa del Piemonte, which will take place in New York City from March 28 - April 2, 2022. First held in 2011, La Festa del Piemonte, brings together growers, wine lovers from around the world and dozens of top sommeliers for a weekend event that is the ultimate Piemonte experience.

Luca Roagna has taken his eponymous estate to new heights in recent years; these sought after wines are firmly perched at the top of collectors' wish lists. Pajé, an historic vineyard in the village of Barbaresco, consistently produces wines of exceptional distinction. In this online seminar, Antonio Galloni and Luca Roagna will lead a vertical tasting of three vintages of his Barbaresco Pajé: 2016, 2014 and 2010.

Join Antonio Galloni and three exceptional Barolo producers to explore Brunate, one of the region's most elite vineyards. The 2017 vintage Barolo Brunate wines from Cerreto, Francesco Rinaldi and Giuseppe Rinaldi provide the ideal lens through which to discover the nuance and power of the site's terroir. The tasting kits contains a bottle of each wine plus access to this extraordinary seminar.

Although there is little substitute to experiencing La Festa del Piemonte's Masterclass live and in person in New York City, this is the next best thing. One bottle of each of the 2017 Masterclass wines will be sent to attendees who will also receive access to videos of the winemaker presentations.

Rare Wine Dinner (Email events@vinous.com to be added to the waitlist)

The schedule of live events kicks off with a once-in-a-lifetime vertical of Giuseppe Mascarello e Figlio’s Barolo Monprivato and Cà d’Morissio, with vintages back to 1989, all from magnum, hosted by Antonio Galloni at The Modern, one of New York's most stunning and highly acclaimed restaurants.

We are delighted to welcome you to The Pool, New York City’s most iconic dining room, for what promises to be an extraordinary evening of wine, food and camaraderie. Fifteen leading Barolo producers will each host a table and pour wines from their library. In the spirit of conviviality, we invite guests to share bottles from their own cellars. The Gala Dinner is the perfect occasion to open rare large formats and special bottles.

Hear directly from the growers as they talk about the current vintage and recent trends during the 2017 Barolo Masterclass. Our Barolo and Burgers lunch at The Grill, an annual tradition, rounds out the schedule of live events. 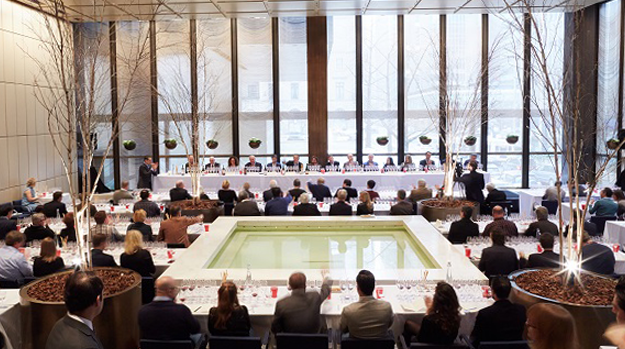 Entry to restaurants will be subject to the prevailing requirements from New York City. For any questions regarding such requirements, please visit the official website of the City of New York.

The above information is current as of February 24, 2022 and is subject to change.